Nine swell books (most in the good sense, some in the bottom-of-the-bog sense)

I kept delaying posting this because I was posting about Byuck (1,2) and didn't want to get annoying, and now it's really long and so annoying. Yrwelkm.

Anyway, three extreeemely different works of Mormon literature, plus a memoir, poems, comics. Hooff. Such a smorgasbord! Definitely take at least one of these recommendations.

Not easy to overstate how successful William was with this project. He's been saying, for what seems like y e a r s, that his new collection would do things we hadn't seen before in the Mormon arts.

At first I was skeptical. Although the first story is terrific and unique, I, ah, had read it before. But let's talk about the collection's penultimate story for a moment: "Certain Places."

In short, a person loses their self and appears in another person making them the same self even though they both existed separately and maintain those memories. And then they both become a third person, while ceasing to be what once they were.

Besides being quite the concept, he plays it very Mormon. For instance, you could interpret the story being about polygamy and/or sealing. Or you could say it is a commentary on the Church's contemporary sexual politics. Just for two examples. But to reduce the story to such commentary is to fight against its core strangeness, and the experience the characters are having. They are living these impossible lives and the "moral" is not their concern. They are motivated by their hopes and their regrets and not by what message we might take from their decisions.

The story that follows it, the collection's closer, "A Mormon Writer Visits Spirit Prison," started out rather annoying, to be honest. The form struck me as needlessly complex (and it did require flipping pages all the way to the end) but it did pay off. This is a writer you can trust, even when he seems just to be messing with you.

Which gets to his commentary on "A Ring Set Not with Garnet but Sardius." He posted this shortly before I read the tale and I was glad, because when I got to the end of the story it made a clear allusion by which I mean it clearly was an allusion, but I had no idea as to what.

But reading of his process was great anyway. Largely for its intended purpose (to expose his process), sure, but also because reading once through for pleasure does not reveal as many details as this sort of story can provide. A few things came up which I had only vaguely noticed.

Which is to say two things:

Chris Ware said it takes a thousand times as long to make a comic as to read one. This ratio may or may not apply to Darkest Abyss but it should remind us to slow down. Waterskiing over the surface is delightful, but the fish! the fish!

And this is unquestionably a volume that will reward rereading. 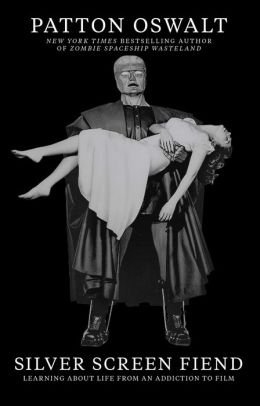 I guess this is the perfect book to read when waiting for an oil change or a smog check or anything car-related, or while taking one's daughter to the park, as that is how I read this book.

It's the story of the author's practically clinical four-year addiction to movies or, on a deeper level, how a person finds a passion and then turns it into either a life or an obsession.

He's good company and the book moves quickly. I really didn't plan on reading it—I somehow picked it up and the library and started by reading the appendix of the films he read—but it was the right book to fit the shape of the times I had to read and I'm glad I did.

It's funny how it served as both a dire warning and an intensely attractive way to spend your time.

Which, maybe this is typical of addition memoirs?

a couple weeks or more

The 5yrold's intended next book had not arrived from the library so I grabbed this off our shelves and, no surprise, she loved it. So now Ramona the Pest is on hold at the library. I suspect we'll read them all.

And why the heck not? 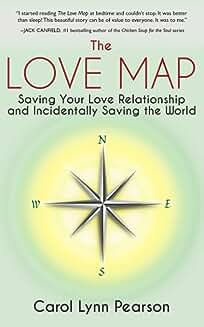 The Love Map is of that tradition that are technically novels but are just as likely to be shelved by your local library in nonfiction, perhaps under philosophy or self-help, alongside books like Zen and the Art of Motorcycle Maintenance or The Greatest Salesman in the World. When Carol Lynn sent me a copy, that’s how she pitched it, as “a very intriguing look at love. Short. Fiction. True—like Jonathan Livingston Seagull is true.”

In brief, it is the story of a marriage on the rocks. One of these sad people goes on a mystical journey with her “Self with a capital S.” The self keeps the name Joanna and gives her Self the name Sylvia, who then takes her along seven steps through the Four Kingdoms: Survival, Joyous Sexuality, Blast Furnace, Through the Eyes of God. Along the way, Joanna—like all of us—will save the world.

I'm glad I read it when I did! It'll make a nice addition to a little project I'm working on....

This was perhaps the comic I was most excited about of all the comics I purchased on Kickstarter during my covid madness. And perhaps that's why it took me so long to start reading it. 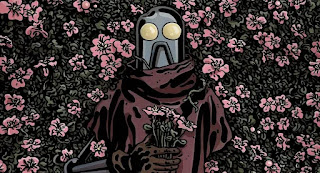 The text has a few grammatical errors and the Big Ideas in the plot didn't really sing for me, but certain characters and scenes and moments were absolute wonders. If we judge a book by its highest point, this is excellent.

And I really dug the stuff at the end about him developing the story and the world and the characters. He worked hard on this and that suggests to me he's someone to watch, that he will only get better.

In short, we're on some other planet. Humans arrived here centuries ago and everything's gone to hell since. But, um, there's hope . . . or something . . . or is by the end? I don't know. But when it was good it was great. 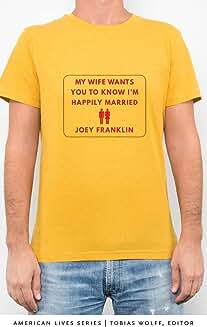 My general experience with personal essayists is similar to Lemony Snicket's with poets (scroll down to where he's talking about Campbell McGrath). I rarely finish single-author collections, that is to say, unless I own them and spend years reading them. So. Doesn't happen a lot.

But I've been wanting to read this one for a while and when I discovered that my library had it, well!

I've read Joey before (but none of these essays) and each of these essays on its own is an excellent piece of work. But read altogether, well, you say motif, I say this again? But that's my bad attitude. And I was able to tamp it down every time it arose and that meant I kept being delighted.

Essays on kissing and cockroaches and the name Joey and hyperbole. The sort of polymathic everyday eclecticism you expect from the modern creative-nonfiction professor. Fun stuff to read.

But better read over a coupla years.

I read this on Darlene Young's recommendation. I forget what she said exactly, something something Billy Collins but different. That seems like a good enough description. That's certainly how I felt in my first burst of reading.

In my final burst of reading, I noticed he has a couple favorite themes. One is his brother and, although they are all admiring, he finds sufficiently numerous ways to address his thoughts on his brother that each felt fresh.

His relationship with atheism is a bit more monotone. He feels a need to address faith and the tools of faith but he's riddled with fear that you might see him as a believer. He can't even talk about a Muse without emphasizing that he does not speak of her "to pretend / To believe in a dead mythology." Protest too much, maybe?

Unsure how I came to put this on hold at the library; my best guess is someone on Twitter suggested that this would be an ideal source text for the upcoming Fantastic Four movie, but who knows.

Anyway, I didn't like it. The kids weren't kids; the story had chunks missing because they appeared on contemporaneous titles; full understanding required too much understanding of Marvel lore. It's very much an insider's book. And I am not an insider.

But one thing I did like was it's attempts (occasionally successful) at capturing the family aspect. Mr and Mrs Fantastic have a marriage that could make them the Nick and Nora of the MCU. I hope so. And while I hope they capture the pathos of Grimm's fate, that's probably something to save for the second movie.

One thing I was struck by in the closing pages is that characters twice broke the fourth wall—not a technique I think of as Schulzian, really, with the exception of Snoopy, I suppose. So check it out:

(note: these are screenshots from the website; in the book it is art-only, neither the frame nor the pasted-in syndicate information appears)

Of course, Charlie Brown (etc) often make an aside in the final panel, but they more usually look off to the wide or roll their eyes. This is different.