BCC Press accepted this almost two years ago and they keep delaying its release so I decided to do another pass. In part because I was getting paranoid about its quality and partly because another pass never hurts. I weeded our a few typos and a couple grammatical errors, tightened a couple things. The total differences are probably under a hundred words (as it currently stands, the manuscript stands at 37,000 words even, a nice number and a short novel—a novella, in fact, were it eligible for a Nebula or Hugo) but this draft is better than the one they accepted in April 2020. So hey!

It's no less fun, to be honest, to pick up a book and really enjoy it, even though I wrote it.

Look for it soon*!


013) The Art of Description by Mark Doty, finished January 28

This too is not the one I first asked the library for. That was The Art of Intimacy and I don't know if I didn't enjoy its first chapter enough or if I had become too excited to consider description, but I returned it and dove into this one instead. (Incidentally, I have two or three more, as well, waiting for me beside the bed.)

And this one delivered! My biggest takeaway is one of those insights that seems so obvious once stated but that I can't be sure I'd ever coherently thought before. Namely, that description reveals not only the world, but the perspective that gave us that particular view of the world. Of course!

The second half of the book is an abecedary of description. You can get a sense of Doty's play if I give you the entry titles: 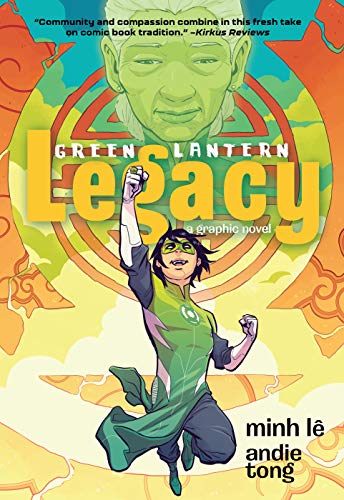 This one was not great for reading out loud. It was also just so-so in terms of introducing and developing characters. But it made one brilliant, brilliant choice that makes it maybe my all-time favorite Green Lantern debut. And I'm going ahead and spoiling this now, so buckle up.

The first thing to know is that our new Lantern, Tai, is just a kid. Thirteen years old. The ring moved from his grandmother to him, which perplexes John Stewart but hey---the ring wants what the ring wants.

Anyway, Grandma dies and Tai's mentors are both largely offworld. But a charismatic billionaire moves into that roll, having known Grandma, and before you know it---oh no!---he's a Yellow Lantern. Gee whiz.

Yellow plays on Tai's feelings of being apart and alone but Tai plays back by using the ring not to make a giant hammer or pie or mecha but his family. And those projections stand with him and give him strength and you know what? It's really beautiful.

So while it's not a very good book, it made one really wonderful decision that made me cry. Well done.

I have now read Serious Concerns and it is consistently delightful. Some recurring themes (darn men, heart-skipping love, the absurdity of professional poets) and some poems sing louder than others, but I don't see how anyone could fail to be charmed.

None of my favorites seem to be online, but a short google will reveal to you the wonders of Wendy Cope. I commend to you the exercise.


016) The Art of Mystery by Maud Casey, finished February 11

These books are great. I don't know if I would have enjoyed them as a younger writer as they're moving around in near-pretentious air, but they are sincere and personal and I've dug all the ones I've read, and appreciated the ones I've skimmed. Pick one that attracts you and give it a shot

This one is about the ineffable and the liminal, the unseen and the haunting, the unknowable and the only-felt. In other words, the stuff fiction does best. Because no matter how closely we look, a good book leaves room for the reader.

You can see some of what I liked by seeing what I added to Wikiquote today. Here's something that can't really be added:

"The poet and critic Yvor Winters one said of a poem that it should contain both paraphrasable and unparaphrasable content, and the same holds true of fiction.

I also owe this book for pointing out that l'amour and la mort are homonyms. Something I don't know how I have not noticed. I mean—how.

since the last one


017) The Art of Bible Translation by Robert Alter, finished February 13This book was fascinating. And delightfully catty. He has no qualms and lambasting other translations and calling them out for their literary and artistic (and occasional scholarly) failures.

And I'm glad he did because it explained to me just why, for all their additional modernity and "clarity" they just felt less . . . biblical. I never thought it could just be that new ≠ holy, but what was it?

Alter persuasively argues that the issue is fidelity to the Hebrew. The King James translators felt the Bible was inerrant and thus tried to capture all the weird quirks of ancient Hebrew, to the point of italicizing the little words they had to add for the sake of English grammar. Modern translations have made a point of rejecting that in an attempt to be more vernacular, to the result that any sense of style the original writers possessed is lost. Alter, in his translation, makes effort to capture as much of the original style as possible.

I picked up his Five Books of Moses from the library (a heft volume, more notes than text) and it is excellent. It feels literary. It feels scriptural. It feels serious. And it's a dang good read. It maintains much of what is excellent about the KJV while bringing it into our century.

I only regret that buying his entire bible runs close to a hundred dollars and it's split into three (too-heavy) volumes only.

Nevertheless, I want it.

Having just rediscovered the brilliant Jinji Ito, I put everything else by him the library had on hold (it wasn't a lot) and started by reading this adaptation of a classic Japanese novel.

I didn't know that was the case until it was almost over and started putting some pieces together and read the back flap where both Ito and the original author were identified.

In short. There's this kid. He is sexually assaulted by two of the family's servants, one male, one female. While there may be more to it, these experiences lead him to be utterly disconnected from humanity. He has no real capacity for maintaining positive feelings toward other humans. Though he has moments of really trying, largely his inability to connect just leads to disaster. Incest and suicide and murder and all sorts of terrible stuff.

He ends up moving from woman to woman and from professional failure to professional failure. The lives he ruins are legion, but most notable are the series of women he finds himself in bed with—most of whom are dead at the end of the affair. But before their deaths, they move from beautiful humans, inside and out, to hollow shells for whom death is a release. Only one of these women dies before her inner destruction. Our protagonist, with his inner damage and his fears and his insecurities and his addictions, destroys them each. Not intentionally, but he is poison. And slowly he destroys them, no matter his intentions. 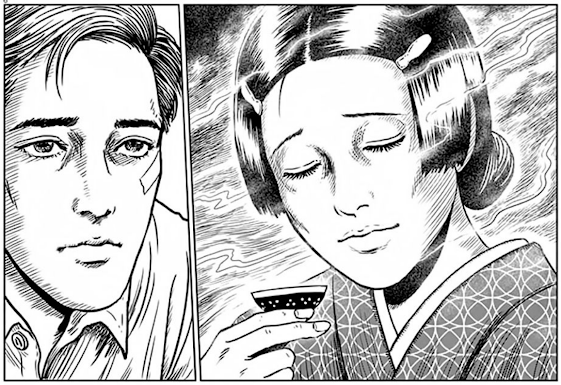 It's not a happy book. And I can't speak to the (apparently great) original. But Ito's presentation of this story is relentless. His mastery of face and body and expression and line drag us down into the horrors these characters suffer. His other books of supernatural horror are terrifying, but this–notwithstanding its (possibly) supernatural elements—is a story that feels possible. And that is so much worse.

A beautifully told story of realism. A horror story. And the least arousing panoply of sex I've ever come across.