Excellent comics, black and white all, and two excellent novels---one for adults and one for kids

My darling dear fixed the kids' hallway bookshelf so, you know, book spines and be seen and books can be found. And yon toddler's immediate response was to find Marble Season and demand a reread. It was a low-quality reread in that we skipped a few pages here and there, but this plotless book still help her attention all the way through.

And rereading it so soon after our last read made me realize that this is a truly excellent book. It's one of the most honest childhood stories I've ever read. And though it is doused in nostalgia, it's kids' p-o-v so it never comes off as mere nostalgia. It feels lived-in in a very now sort of way.

And I got sad that Charles Schulz never got to read it. I would kill to know what he thinks. I suspect he would have really dug it. Alas, alas.

Coupla somehows to start this review.

Somehow I never heard of these books when I was a kid.

Somehow boy number three started reading them which led to him getting the first four in a boxset for his birthday. Which led to him pushing book one on me.

And it was great! It's from the 50s and takes place in the 20s so there are a couple moments that have aged subexcellently but as a whole it's a total delight. If you're looking for something for your kids, not a bad choice at all.

When I accepted a copy of this book for review, I was under the impression I was receiving a slim little thing; so when a 400+-pager showed up instead, I was a bit nonplussed. But the original pitch---David and Bathsheba, Henry and Ann, both filtered through Thomas Wyatt, with wisdom and poetry and subtle religion---still attracted me. So eventually I picked it up from the floor under my nightstand and started reading.

And was immediately enraptured by the quality of the prose. Cook is a marvelous writer.

The first two thirds of the book are about David and Bathsheba and it dances through theirs and other characters' points of view, before largely settling on David as he hides in a cave during the early stage of his penance. It's not until these hundreds of pages pass that we then switch to England where Thomas Wyatt will be our companion the rest of the way. I was perplexed that we had had to wait so long for his appearance. And although in the early pages of Wyatt's appearance we see an elaborate tapestry starring David and Bathsheba which the king has purchased, the connection between the two portions of the book remains ambiguous.

Ambiguous but certain. This is the first time in as long as I can remember* that I have an impulse to immediately start reading the book again because I think I will understand it utterly anew if I do so. But will I?

I've intentionally left it on the bed. I've already told Lady Steed she will like it, so if she jumps right in I won't get the chance. And I rarely reread these days because it makes me impatient. But this could be the exception.

The cover is a curious thing as well. It's lovelier in person---and stranger as well. It's a peculiar cover and I suspect it's terrible as selling the novel, but I actually quite love it. It's just as subtle and unclear as the title  and it only makes sense if you put some work into understanding it.

Which I'm not sure is the accepted purpose of bookcovers, but still. At least it's utterly different and interesting and pleasant to have around.

Anyway, this novel is a sentence-by-sentence pleasure and is filled with hidden treasures and richly drawn characters and fully plumbed emotions and provocative themes wisely explored.

The one thing is it not is tiny. Although it did not feel like a slog at all. I enjoyed every page and the chapters are mostly short so it feels not so dissimilar from tiny after all.

I broke these out because I've been wanting to reread them and because Lady Steed is interesting in picking up some comics (it's been a comics-dry year for her). Although I remember loving them (1, 2---these links good for pictures, too) I didn't remember much in the way of details. And that's staying true. I really haven't remembered anything yet until it occurs. In other words, I'm having the full measure of fun! 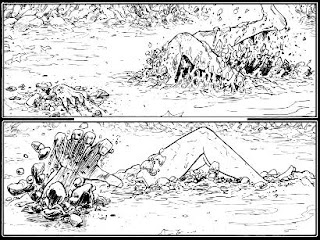 Moore's casual shuffling of mythologies with naturalistic and full characterizations are part of what make these books so pleasurable. Getting to know realistic characters as they plumb the chaos of a suddenly greater unreality---this is what, say, Stephen King is good at too.

It's interesting to me how my mind sorts and remembers things. I can read a novel for the second time twenty years later and every moment comes back to me as I read. But this comic that I read only six years ago is a revelation at all times, as if I had never seen it before even though I last read it six years ago.

I know this is probably unfair of me, but I just never expect serialized fiction to be this well plotted. Here we are at the end of Rachel Rising's first arc and what do you know---everything slides together so nicely and with resonance no less!

I haven't read any of Moore's other work (although I own Echo)  but I read today that they are all couniversal and a sequel of sorts exists.

But first, I own three more volumes!

I'm a little worried I've never read this before. I can't find a previous review and I can't be sure if I recognized anything. Very peculiar!

Some of the ink work---notably in the early pages---has changed from the earlier volumes. Although the story reached a natural conclusion in 4, plenty of threads are still here ready to be pulled. And I'm appreciating how it's expanding.

My best guess is, having reached a nice conclusion, I kept buying volumes but waited to read them until the story was complete? then forgot I hadn't done so? I'm really not sure.

The other possibility is the post is lost thanks to this weird glitch with Blogger where some posts just never get indexed. It's very strange.

I think what I love about these books is pretty typically Theric. I like explorations of darkness. I like books peopled with female protagonists. I like interesting new takes on favorite mythologies and I favor no mythology like Eden.

Lilith has been a character since the opening pages of volume one, but only now are we getting her memories of Creation. And they are a new Creation story. But this isn't feeling like a  sneaky switcheroo--these newly revealed details fit into what we already know and have explanatory power.

As I said above, I'm impressed by serialized works that come together like this. I don't know if it was planning or discovery, but it's terrific.

right up to midnight

The conclusion! Past the halfway mark I could not figure out how he was going to wrap it up, but he found a satisfactory close---then twisted it with some postcredits play.

And, since a sequel proper never appeared, I guess I have to go read this.

(Somehow, explanation unknown or unremembered, this copy o' mine is signed. Curious.)