It's not racist if I suggest it's true for everybody, right?

I’m speaking from personal experience when I say of any black
man who conks today, or any white-wigged black woman, that if
they gave the brains in their heads just half as much attention
as they do their hair, they would be a thousand times better off.
Thritten by Th. at 1:35 AM No comments:

E. B. White on the White Horse Prophecy?

I'm happy to say that, in the end, the books (which really form one whole novel together COMBO POWER!) add some complexity and nuance that the movie, excellent though it was, didn't quite have. Don't get me wrong --- the movie was terrific, but compared to what the books pulled off, taken as a unit, well, here's my point: you should really read the books. They're about the most fun I've ever had reading comics and they have so much heart.

And it sells the Twentysomething Culture in a way that, for the first time, made it look good to me, and wish I'd spent a bit more time being a goof in my younger years. Not to the point of having regrets, mind you, but now I see why that life has a pull.

Anyway. They're great books. Check them out.

038) Scott Pilgrim & The Infinite Sadness by Bryan Lee O'Malley, finished May 12 end of the day

This is where the books and the movie begin to fully diverge. Still highly enjoyable and the metahumor hit harder. For more on Scott Pilgrim. see below. In the meantime, here's the song that inspired the books:


My second Jeeves and Wooster book (the first --- can you believe Wodehouse wrote over 100 novels?) --- and another bounty of wit. Douglas Adams considered Wodehouse one of English's great geniuses and although I'm not prepared to go that far, I'm happy to argue you won't be disappointed. Pick up one today.

I've really come to grasp the usefulness of some manga techniques (eg, changing a characters total appearance in response to their emotional state) over the last ten years, but Scott Pilgrim really locked me in. As for the movie, which I love, what casting! (Did you know they made cartoons, too? This totally happened in volume two.)

Why oh why did I not ask the library for all six volumes at once? What a fool I was. (Requesting now.....)

about an hour each over two days, the latter while walking to and from jury duty

I'm moving at a more leisurely pace these days, but that's because I hate not having fresh Peanuts waiting for me on the nightstand. It's such a joy, owning these books. And when I've read the last I'll start again from the beginning.

This time I got to read the strip that ran on my birth day and, I'm sad to say, it wasn't killer.

Also, my reading has been changed by thinking about 3eanuts. Which is pretty great but gets in the way. (Unlike Gw/oG which actaully makes Garfield enjoyable.)

I ended this book stunned. Unable to do anything but breathe loudly and not cry. What a beautiful book. So glad the clip in Best American Comics made me library it. But I need to get my own copy to read and read again. This is Jimmy Corrigan-good, folks. Take this one panel:

So much is conveyed here. She how calm she is, yet how much tension is revealed just in her wrist. He's being flippant but we the reader see the emotion in his wife while he flits across the surface in ignorance.

And this is a more realistic panel. What happens next in visual metaphor is just as stunning, as the characters separate into the separate identities they once had.

Mazzucchelli is the artist of the excellent City of Glass adaptation and the famed Batman: Year One (both of which, sadly, I apparently read too long ago to have reviewed; coulda sworn they were here, but I canna find them --- both worth reading and probably I should read them again).

Promise me you'll find and read this book. It's stunning. I don't want to say masterpiece until I've read it a couple more times, but I'm tempted all the same. What a piece of art.

When I first started reading this book nearly three years ago, I though I would discuss its scansion and other like litty thoughts, but just click on this and you can do all that yourself: 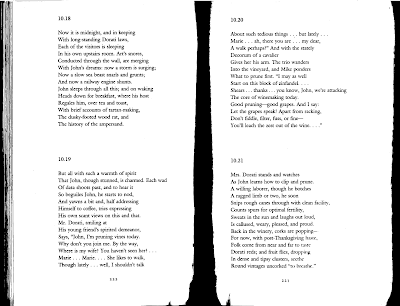 That's what the whole book looks like. Two to a page, all the way through. Also, the dedication and author bio and the table on contents are in the same form. (Note: i just opened the book randomly and scanned. I still haven't bothered to look and see which two pages I've just given you.)

So, first, the book is an experiment. Reading about how he decided to do it (blame Pushkin) makes me less judgmental, but really, as a whole, he pulled it off so why complain?

It's not, however, that good of a book. It has to wax meta at times as Seth apologizes for the absurdity of the book's form etc etc but as a whole, it's some okay interrelated stories stuck together in 1980s San Francisco (with all the youguessedits that entails). Without the format its simply a subpar novel. So when you pick this up, it has to be because you are inherently interested in the form for its own sake.

(Vikram is a bit gimmicky, of course. His second novel is, by some estimates, the longest book in the English language. Which isn't to say it's not good [it had better be] just that he likes his books to be capital-d Different.)

One thing about this book is that it is much shorter than it appears. With all that white space, you can tear through it pretty quickly (I did most of my reading in just a couple sittings). And the characters occasionally show glimmers of depth and it's not that bad, really, but claiming it's great is, I think, to make an error. I imagine the praise it received upon release was mostly wowery that such a book existed. I doubt many who loved it then would feel the same way now (though I'm ready to be proven wrong).

I would like to love a novel in verse, but it won't be this one. Besides the slightness of the story and the unevenness of the verse, it commits many New York Novel sins (although, of course, this time the City That Cool People Know is San Francisco), is moralistic and preachy, and, in the final analysis, just didn't do it for me. But you may like it. Who knows.

Svithe: On rocking the bow tie

Somehow (I think it may be a certain scientist's fault), wearing bow ties has become du jour among my ward's Young Men. Then, last Sunday, at stake priesthood meeting (Holy crap but is this post Mormon-jargon heavy; I apologize.), the stake president spoke of his law school days when his home teachers (there I go again) taught him how to tie a bow tie. In honor of this, he announced he would now wear a bow tie on fast Sunday every month in which he had finished his home teaching the month previous (do you follow?)

So now the Young Men are arranging fabric and sewing machines to a) make their own ties and b) actual ties that tie which they will c) learn to tie.

That they may wear them.

Presumably on fast Sunday. Presumably in recognition of having done their home teaching.

Stretching for the famous fish

Not just any famous fish, of course. I don't want you to think I'm that kind of ichthyophile. I mean the divine fish.

As a diehard ichthyolotrist, when I say stretching I mean it in the theological sense of killing the enemy squid and stretching its innards over coat-hangers that they may rot in the sun sending a sweet succor into the sky. The tricky part is timing it properly so the fumes break free of the atmosphere at the right time of night to pass through Pisces. (It's a religion that requires a lot of physics and math and stuff.)

Stretching for the famous fish is inherently satisfying though. As the fish says, I never said the stench would be worth it, just that it would keep the crazies off your back.

September 11, 2001 was so long ago that it's hard to define how I feel about some Navy Seals finally taking out the badguy Teancum-style. I'm glad, yes. I feel it was an appropriate use of deadly force.

I heard the news this morning on my clockradio, but then I accidentally turned it off and slept for another thirty or forty minutes and when I woke up I was unsure whether or not it had really happened.

I wonder how Americans celebrating at the White House and Ground Zero is being played on news stations across the world. I wonder if al Qaeda will successfully pull a retaliation in the next couple weeks. I wonder how long till we're all familiar with conspiracy theorists' claims that Osama's Alive! and living in Jamaica! with a hooker!. I wonder if this will help us get our troops out of the Middle East any quicker.

I hope that the military's efforts to prove that the body was Osama's and the at-sea burial all have more of the desired outcomes than unexpected bad outcomes. I hope he doesn't become The Martyr.