No so many movies this January, I'm afraid.....

I came into this with a good attitude, but I was the least impressed. I didn't believe in the romance at all. And while I generally liked the film there were as many moments I thought were dumb as I thought were good.

And my darling dear was enchanted much more than I. Which is not really the normal order of things at all.

Keep the surprise alive in your relationships, folks!

The baby actually picked this one out first, but by the time the criminals were chasing down the little girl she'd been holding her hands across her face for some time. Her second choice starts with a slave-trade kidnapping so that's why we switched to Disney and The Princess and the Frog. Anyway, after she went to bed, I came back for the last half of this movie.

Which is a straight-up action movie with escalating stakes etc etc. Plus the sorta cubist, PC Vey-esque art was pretty interesting. They didn't take advantage of the possibilities it presented often enough like allowing the cubist backgrounds to change the perspective midshot without so much as shifting the camera.

Although it's not one of The Greats or anything, it was not what I expected and I was delighted and constantly surprised.

What is wrong with people?

This consistently appears at the end of Coen Brother lists, dismissed as a lesser work. Have they ever revisited it with an honest heart? This movie is perfect. We should be so lucky to see screenplays this well made every year.

It has everything! Excellent screwball dialogue. True despair. Wit in every frame and the camera itself. Career performances. Irony and sincerity emulsified as we rarely are blessed to see.

And detail that never stops giving! Many are the scenes I someday need to go through frame by frame!

I can accept that tastes differ, but the only two explanations I can see are critical laziness (my choice) and preference for greater darkness (Lady Steed's theory).

Anyway, we missed watching it on New Year's Eve, but it's just as good a movie for New Year's Day.

Incredibly, we've never shown this to our kids. At some point, Lady Steed decided it was too rude. But suddenly tonight she proposed it and I'm happy to say that although it can never provide a change-what's-possible-in-the-movies moment again, it's still funny and heartwarming.

And although I hadn't really thought about it before, it paved the way for Disney Renaissance #2. Princess and the Frog (see above) attempted to learn the romantic lessons of Shrek, but Tangled and Frozen learned from and expanded upon. Although never with anything like unto this much irreverance.

Couple notes on voices. Yes John Lithgow is funny but he's also quite great at being terrifying. And also I may be crazy and surely no one cares, but doesn't Cameron Diaz sound a lot like Claire Danes?

I last saw this Fall 2001 where it made a huge impression on me. I hadn't seen that many foreign films or fine cuisine at that point in my life, and it became an almost mythological benchmark.

Babette's communion is one in which the temporal and the spiritual are one. And there's something good in recognizing that.

This is one of the more interetsing uses of color vs b&w and it's absolutely the sort of movie that will bore your kids to death. But found it deeply involving, even though pretty much no forward movement happens for over three quarters of the runtime.

Bruno Ganz, who plays our main angel, in b&w, seems like a Cary Grant or George Clooney type. But in color he turns into Kevin Spacey. And he's not much older than I am now. I hope I don't look that old. Although I suppose it doesn't matter so much so long as my soulmate isn't yet in her twenties....

Anyway, I see the appeal and I see how it would reward further viewings. Although I don't see me doing so. I would try out the sortasequel, but it doesn't seem to exist anyhere. Boo.

While I don't technically track the short films I watch, there is precedent for excepting collections, and this seems like a clear time to do so. I didn't know the whole series would autoplay, but the collection was just the right length for all the apples I had to peel and slice.

And I learned a lot about Harold Lloyd! I had no idea Lonesome Luke was such a different physical presence from The Boy, for instance! Or that he made so many films with the same supporting cast, viz. Snub and The Girl!

Nothing like a sound education in silent comedy. But I do wish these new releases would take the time to get the frame rate right. That doesn't seem like too much to ask, does it?

It feels like we took a bit long to get around to this, but it was still fresh and surprising and wonderful. Pete Docter's career has so many high points it's no insult to say this isn't my favorite, but I was still surprised by how warm and unexpected it was, beat by beat.

I will say I'll need time to think about it. And that I look forward to watching it again.

After showing kids the first Shrek (see above), I made the kids watch Sideways's musical take. Besides the facts that the kids wanted to see it and Lady Steed had forgotten her distaste for it, I was particularly interested myself because of that video, and his analysis is definitely the lens I watched it through.

I'm not sure it holds up quite as well as the first, by those criteria set.

Still, though. It's a solid movie with high points comparable to the first, and more interesting villains. And I really love the Frou Frou cover in the credits.

I would like to know what critter Dragon spent the bulk of the movie as, however. And how the heck certain fairytale creatures travelled 700+ miles in maybe an hour.

This was a staple of my childhood but this is the first time I've seen it widescreen (which I realized in the final shot when it wasn't all sqooshed together). It's a little dumber in a couple spots, but it's a lot smarter as well---references I didn't catch as a kid, for instance. The legal-eagle stuff is both better and worse coming out of 2020, but I can't predict your mileage in that respect.

A big part of what makes this enjoyable is the cast. I like Dean Jones. I like Tim Conway. I like Keenan Wynn. I could go on.

Plus, I suppose, we should give a shoutout to '70s Disney slapstick. It's part of the formula and everyone needs some of that stuff in your entertainment diet.

Email ThisBlogThis!Share to TwitterShare to FacebookShare to Pinterest
Labels: movies

We have a lot of books at this house. And I am literally in the middle of reading at least thirty-five of them. This is ridiculous. So much like when I decided to only read books I was already reading---or the same thing for an entire year--- but this year it's just a matter of ownership. With a couple preplanned exceptions (mostly library books I already have on hold), I'm only starting books I already own. And hopefully finishing even more that I already own.

001) The Sun Has Burned My Skin: a modest paraphrase of solomon's song of songs by Adam S. Miller, finished January 3

I bought this a long long time ago, but there are no words on its spine and so it disappeared. I happened across it recently and pulled it down. I thought about giving it to my beloved for Christmas but I wasn't sure she'd go for it. So I read it instead.

I mean---it's a bit slight, but it's not pretending to be anything other than what it is. And what it is is quite lovely. Add it to your lds eros collection. 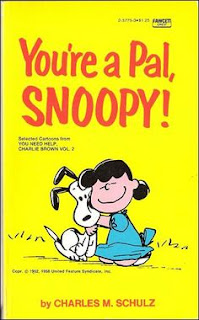 This became the new comic after we finished Snoopy there. The little girl loved it and wants to start again last night. Usually I won't reread comics, but I'll make an exception for this one. If she still wants to. I did leave it with her to look at with her flashlight so she may be over the desire by tomorrow. Time will tell!

Editing fail I noticed: I placed four (four!) stories that end with characters laughing right next to each other. Sheesh, Jepson.

The baby wanted right back into this one, as soon as we'd finished. Which was fine but I didn't expect her to stick with it all the way through! But she did!

It did take us longer this time, but that was largely because she had to keep interrupting to how me her favorite pictures. Nice job, everyone..

Yes, we did start SERVED again on the 18th, but sometime today while I was gone, she got the nighttime books down and when nighttime came, they were missing. I did find all the iPlates books though which is great since I've bought them all but I have not read them all---and the 4yrold's read none of them! So while this is a bit short to technically qualify for five books at a time, I'm supposed to be up on the Mormon comics thing. So I'm counting it.

Anyway! It's a brief thing, introducing a couple non-scriptural characters in service of introducing the brief proselyting efforts of one Samuel. But that story will have to wait for another book. And since the shorter books are unnumbered and often are named after invented characters, getting the order right can be tricky.