Nearing the end, destroyed by our friends

103) The Gigantic Beard that was Evil by Stephen Collins, finished December 26

Beautifully made book. Lovely to touch and to hold and to open and to read.

It's a morality tale warning us against the conformity and gets a bit heavy-handed in the middle, but as they take Dave and his beard and remove him from the once-safe Here and cast him to the unknown chaos of There, the novel redeems itself by sliding back towards ambiguity.

Of course, like so many comics today, this one is ultimately about story itself, but it's about story in a somewhat new way---which makes early moments like this stronger in retrospect:

Nice layering of details though makes this a terrific bit of literature, regardless of your or my personal opinion on its final level of success. Check it out!

How I love McEwan's writing. Even in a book with an overly projected and contrived "tragic" ending, just reading McEwan is a delight. His words and sentences and paragraphs are joys. His adeptness with metaphor and dialogue and the whole dang toolbox.

This story pits humans against their work and I find myself taking art's side even though the tale warns me again and again that's a mistake. It's a startling balance.

Plus, the novel is short, under two hundred pages. This is a more natural length for me as both writer and reader. It's nice to be reminded in this post-King era that short books are still allowed.

Bryan Lee O'Malley has done it again. He has managed to put utterly realistic characters into a contemporary world of metafantasy and made us care about them and understand their insane journeys. Seconds is about a late-twenties chef and her manic ability to screw up her life and the magical gift she's given to fix her mistakes.

Since O'Malley credits a drawing assistant and a colorist and a letterer, I'm not sure how single-artist this novel actually is, but regardless, it's freaking amazing. And not just the execution of the story. The execution of the detail. He's taken manga's genius and alternating between detail and no detail and put it to proper use. He does amazing things with panels that are pure black. His characters are truly cartoony but somehow are shaped and move like realistically drawn humans. 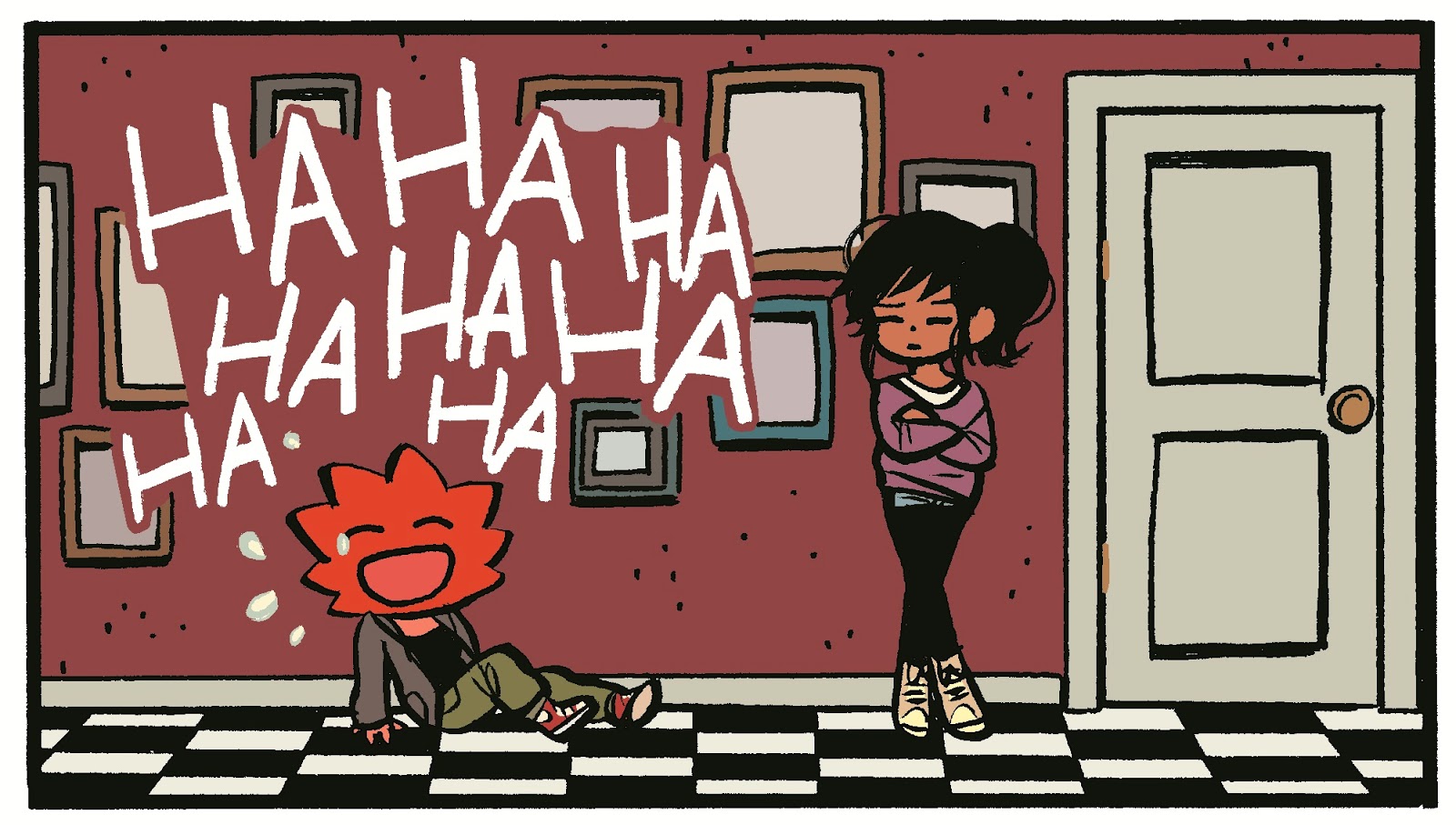 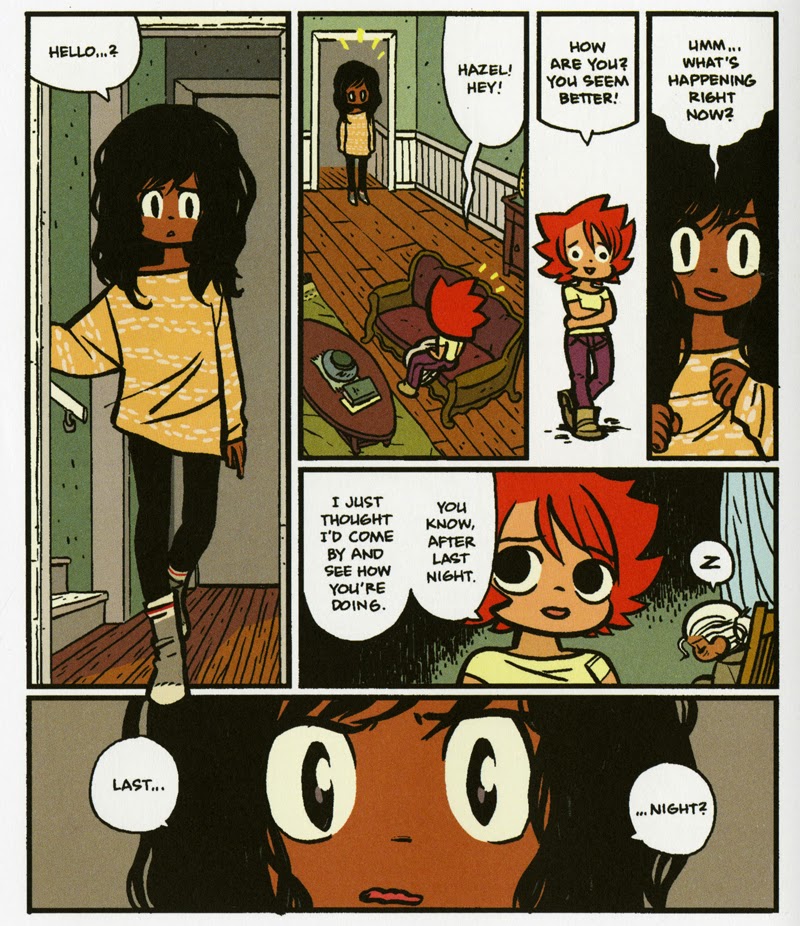 The story devolves into chaos but never loses its way---not an easy feat---and the ongoing tension between Katie and her narrator is delightful and instead of throwing the reader out, keeps us close.

If I were willing to make a scan and write all day, I could keep talking about this book for hours. But I got other stuff to do. Read it yourself.

I believe I first learned about Paradise Vue from Storyteller in Zion (but I can't check because I can't find my copy), and so for twenty years I've looked forward to reading what is, according to its back copy---presumably penned by Card---"the funniest Mormon novel ever published. . . . [and] also the best." I finally bought it last January and finally picked it up recently.

Only to be pretty much immediately and constantly disappointed. It doesn't help that Card's introduction talked about how much he loves the book, dropping comparisons to Austen and Twain and Dickens like anyone who reads the book will feel the same.

The novel has a hard time settling on anything akin to a plot. Which isn't unforgivable---I don't mind a bit of picaresque now and then---but all the nonce characters and situations are set up with some lazy tell-not-showing then disappear again. At the end, where the novel decides it needs to have a point, that moral/resolution is projected much too strongly. Somehow, the final chapter manages to work even though I still don't really care about the widow's widowness or the cuckquean's husband leaving her. Maybe I'm just a very generous reader....

I'm not being too harsh, but I should point out that the novel has moments where it almost works. But there are much more moments like this:

As she grew more familiar with the group, Doris developed a sense of camaraderie with them. She barked orders and encouragement to each woman individually. (61)

If ever there were a moment to expand with actual diologue and business, it's this, right?

Or maybe not. After all, Doris will never appear again.

Which is probably for the best. When first introduced, Doris seems like she will be an interesting character. But then she devolves into being characterized solely by saying funny Asian things like "Dericious" (66).

I think one thing that made this book impressive in 1989 is how Transgressive!™ it is. The characters drink Pepsi and Diet Coke like Nick and Nora drink cocktails, and every hell and damn is italicized to make it extra realistic.

I can't get over how disappointed I am. I'll admit I might have been expecting too much, but gee whiz. It should at least have been a good book, you know?

Card started Hatrack River to publish books more honest than the extremes on either end being published by Deseret and Signature. His writings on this topic inspired me to get involved with writing Mormon fiction. But reading this novel---? I suppose I'm just thirteen years old and learning my parents aren't perfect all over again.

I would like to know if anyone's read other Hatrack titles and could tell me of any of them are more successful?

I'd seen this book around before but never picked it up. I had all the Sundays here or there, so why bother?

But when Little Lord Steed chose it from the library, we checked it out and brought it home. I'm so glad we did.

Just a few years after Calvin disappeared from newspapers, Ohio State did an exhibition of Watterson's originals alongside the colored printed versions. Sure, I've read all these strips before, but this book gets you one delicious step closer to the originals. Wonderful.

And even better are the notes from Watterson on his changing process. I could read something much much longer with these insights.

two or three days or i don't even remember


035) Of Many Hearts and Many Minds: The Mormon Novel and the Post-Utopian Challenge of Assimilation by Scott Hales, finished May 22
034) Field Notes on Language and Kinship by Tyler Chadwick, finished May 21
033) The Long Ships by Frans G. Bengtsson, finished May 20