I discontinued the Preseason Oscar Game after 2010 because I had never had that many participants and because, ah, I always won. Which is boring.

Anyway, I'm bringing it back this year because I believe the time is ripe to waste time thinking too hard about movies we may or may not have even seen yet.

After you read the rules (or before! hey! why not!), click on over to http://bit.ly/funwithflicks and play away.

This year's winner will get a prize. Specifically, a sweet decades-old paperback that I think you will enjoy. Perhaps because of its appalling cover suitable for framing. (If you don't want one more physical thing around your house, or if shipping is prohibitively expensive, we can come up with a digital substitute.) 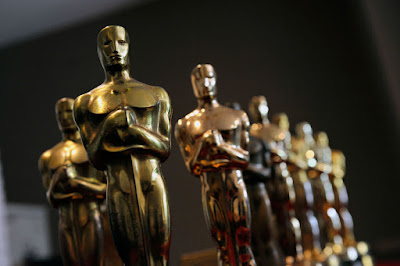 1. Your goal is to predict that a movie will be nominated in a particular category (not that it will win).

2. You may only make one nomination per award.

4. The winner will be the person who makes the most correct nomination guesses.

4a. If I can't recognize what you typed as the title of a nominated film, type better next time. Geez.

5. In the event of a tie, the tied player who submitted first will win.

6. Some categories require the name of a person or a song in addition to the movie title.

7. All entries must be submitted to http://bit.ly/funwithflicks by the last minute of November (California time). Part of the Preseason Fun™ is the impossibility of having seen every movie eligible.

8. You may research your answers anywhere you like. Lots more chatter online these days than when this game was last played.

9. If you work as a film reviewer, festival programmer, are an Academy member, or are otherwise given unequal access to films, you may still play but you get a -10% hit as handicap.

10. You do not have to take a stab at each category to qualify. But, obviously, the more complete your survey, the better chance you have of winning.

11. After the real nominations come out next year, I will do the math and announce the winner.

12. The winner will get a cool prize.

13. So please beat me so I can give it to someone this year. (I am, it bears repeating, undefeated.)

Note: I inputted my guesses already today, while information on the race is less available than it will be in coming weeks. It's my way of being a good host.
Thritten by Th. at 10:16 AM 3 comments: