From Bancroft's History of Utah:

There is a difference between marriage and sealing; the former is secular, and the latter both secular and celestial, as it may be either for time or for eternity, in person or by proxy, and with the living or with the dead.

And now some excerpts from the exceedingly long footnote for the paragraph from which that line comes (follow the link and read the whole thing---interesting stuff, but offtopic today):

Gentile marriage and divorce are not recognized as valid in the Mormon church. In its early days, the church had no marriage ordinances of its own, and the requirements, conditions, and ceremonies incident to the rite were similar to those of the various protestant sects. Nor had it officials legally qualified to marry, other, perhaps, than a few such men as Sidney Rigdon, wire, having been duly appointed to preside over churches of other denominations, were still competent to join in legal marriage. In 1836, when the church was three years old and the Kirtland temple about to be dedicated, we find Joseph petitioning the court of Medina county, Ohio, for licenses permitting his elders to perform marriage ceremonies, which authority had been refused them by the Geauga county court.

Later, when the church had gained power, the result of more complete organization, Joseph announced, as its belief respecting marriage, that it 'should be solemnized in a public meeting, or feast, prepared for that purpose,' and that the celebrant should be 'a presiding high-priest, bishop, elder, or priest.' But no prohibition was issued against marriage by any other authority. Neither were church-members forbidden to marry out of the church, though any so doing would be considered weak in the faith.

In some European countries (and, I hear, most places outside the US), the Church still has no power to legally marry couples. That's done by civic authority with sealing to follow.

Perhaps it's time to step away from our American assimilation and follow this template---and stop performing legally binding marriages. Then the question of what is or isn't marriage won't matter. The Church can seal as it pleases and we can take our time figuring out just what the eternal implications of sexuality are.

The great thing is we don't have to wait for legislation to decide A or B or Z, we can just act.

I tied a bow tie

I've been wanting to learn to tie a bowtie for sometime and Lady Steed gave me a couple for Christmas, but I haven't taken the time to get both YouTube and a handmirror at the same time until today. Then I pulled up the video I selected as the best clear back in February, propped the mirror up at the edge of my laptop and it only took one try. Not bad. Not perfect, but given the quality of the image, perhaps you can't tell.

Now I just need to take a deep breath and untie it. So I can do it a hundred more times and develop some muscle memory . . . .

Reading books to pass the time on the road.
Also some to help define my future.

I read this book at least one section per day (each chapter is broken down into smaller sections), never missing a day until I finished. I had to because, although it was good, I knew I would never finish it (without taking a couple years) unless I was disciplined. And so that's what I did.

I'll write a Motley Vision review on this later and will link to it [here] when it goes up. Hopefully this week.

In the meantime, I've written the Wikipedia article(s) and added a bunch of examples to Wiktionary.

a bit over three months

I've never read this Dahl even though I've now seen the movie dozens of times (I like to think he would have liked it) and even though I read tons of Dahl as a kid. (And as an adult, while we're at it.) This is just exactly what I expected from a fifty-page Quentin Blake-illustrated bit of Dahl. Read it. And don't miss the movie.

While we were spending a couple weeks staying with friends and family, I read most of these two books. Probably 80-95% of Wicked Plants and, if you ignore the actual recipes, at least 60% of Make the Bread---probably past 70%. And I loved them both.

Although now I'm afraid of all plants I don't have copious experience eating (though I want to try kudzu sometime).

Also: I'm starting with making my own kimchi. Maybe some worcestershire sauce. Definitely not pastrami. Don't have the pantry space.

Folks, this is what libraries were born for. Try them out.

between the two a week

This has been on my too-read list for some time, but I finally picked it up because I'm embarking on an althistory project and although mine's not hardboiled, when I trod where Chabon hath trod, I want to read his travelogue. And I'm glad I did. It's a great novel. And the way he realized Jewish Alaska is a better than I had planned version of what I had planned for my own project. It sets a high bar. Plus, he wrote a longer version and completely threw it away. The published novel is its sorta sequel. I find all that trashing inspirational.

Sure wish I had time to write disposable novels. . . .

Anyway. Neither here nor there. Better write a good one the first time.

This book is such a remarkably easy read, I found it hard to remember that I didn't already know this stuff. In fact, I knew almost none of it. I did not know Squanto was such a Machiavellian. I did not know King Philip's War was just one generation after the Mayflower landing. I had no idea that the Pilgrims and the Indians were so close to establishing a lasting peace. If only there had been a bit of miscegenation, methinks, American history would be gobsmackingly different.

Reading through the copious notes at the end of the book, I learned that while the information in the book has been gradually becoming available over the last decades, it's never been compiled. In a very real way, what I learned singing songs and making handprint turkeys as a kid.

And to be so riveted in the process? Priceless.

Read the reviews of 25-28.
028) Perks of Being a Wallflower by Stephen Chbosky, finished May 24
027) The Lover’s Dictionary by David Levithan, finished May 16
026) The Guernsey Literary and Potato Peel Society by Mary Ann Shaffer and Annie Barrows, finished May 10 (I'm astonished a month has passed since I've finished a book)
025) Dominant Traits by Eric Freeze, finished April 10

The semi-finals are over

Last year, with a reasonable lead in the semi-final game, the umps and coaches decided to what-the-heck play one more inning and the Big O's team fell to the Diamondbacks and lost.

This year, after a seesawing lead and a tie at the start of the final-for-sure inning, his team put up four runs then held the Angels to one. They're off to the championship game.

The playoffs are double elimination and O's team, the Padres, lost their first game. So it was hard at that point to imagine them making it much further, especially since game two was against the team with the best regular-season record---a team that had already beaten the Padres twice---a team that went up 9-1 by the end of the first inning. In a league that ends games automatically if the run difference hits ten.

Largely on the back of great pitching. After that first inning, the fielding came together and the pitching was rocksolid and they didn't give up another run till the final inning.

The Big O pitched one of those innings, but just one. To keep his pitch count low so he could start the next game.

[Aside: O can only pitch 50 innings in a game (or, if he hits fifty during a batter, he can complete the batter). If he pitches >20, he can't pitch the next day. More than 35 and he can't pitch until two calendar days have passed. >50 and it's three days of rest.]

Although, given how much he practices I perhaps shouldn't be, I'm amazed that this son of mine can really really pitch. I was never even comfortable tossing a ball clear into adulthood and he has half a dozen pitches at eight years old.

Anyway, after that come-from-behind second game, the playoffs have felt a bit inevitable. Every game could have been the last, but they won four games in four days, the last one against a team that hadn't lost yet. That's the team they played again last night. O went three innings. The lead bounced back and fourth. For the first time since the first inning of game two, nothing felt inevitable. I just didn't know if they would win or not.

And this weekend they play for it all.

Whether he wins or loses hardly matters. It's been an incredible season, he's had fun and he's played extremely well. I'm satisfied.

No way to know if more championships will be in O's future (in a way, what a bummer to have second grade be your best year ever), but something of destiny seems to hang about him. So, maybe? We'll see.

Click on the photo to see a few more. These are just some of the great photos taken of the team by this gentleman. 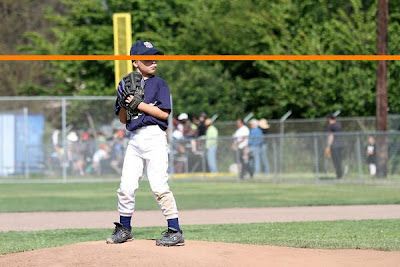