Three mid90s Halloween specials. One stars Scarecrow; one stars the Hatter; one's modeled after Christmas Carol. They were good.
Nothing extraordinary.

It seems like the best comparison to make, at start, is to Love Is... or Happiness Is a Warm Blanket. It is guileless and kind in that way, although a dark edge appears here and there. That edge takes a while to reveal itself, but it's a bit sharper than I expected. But the darkness is always there. Much like in,
say, Inside Out. Sadness is celebrated in this kind book. As a part of life's beauty. 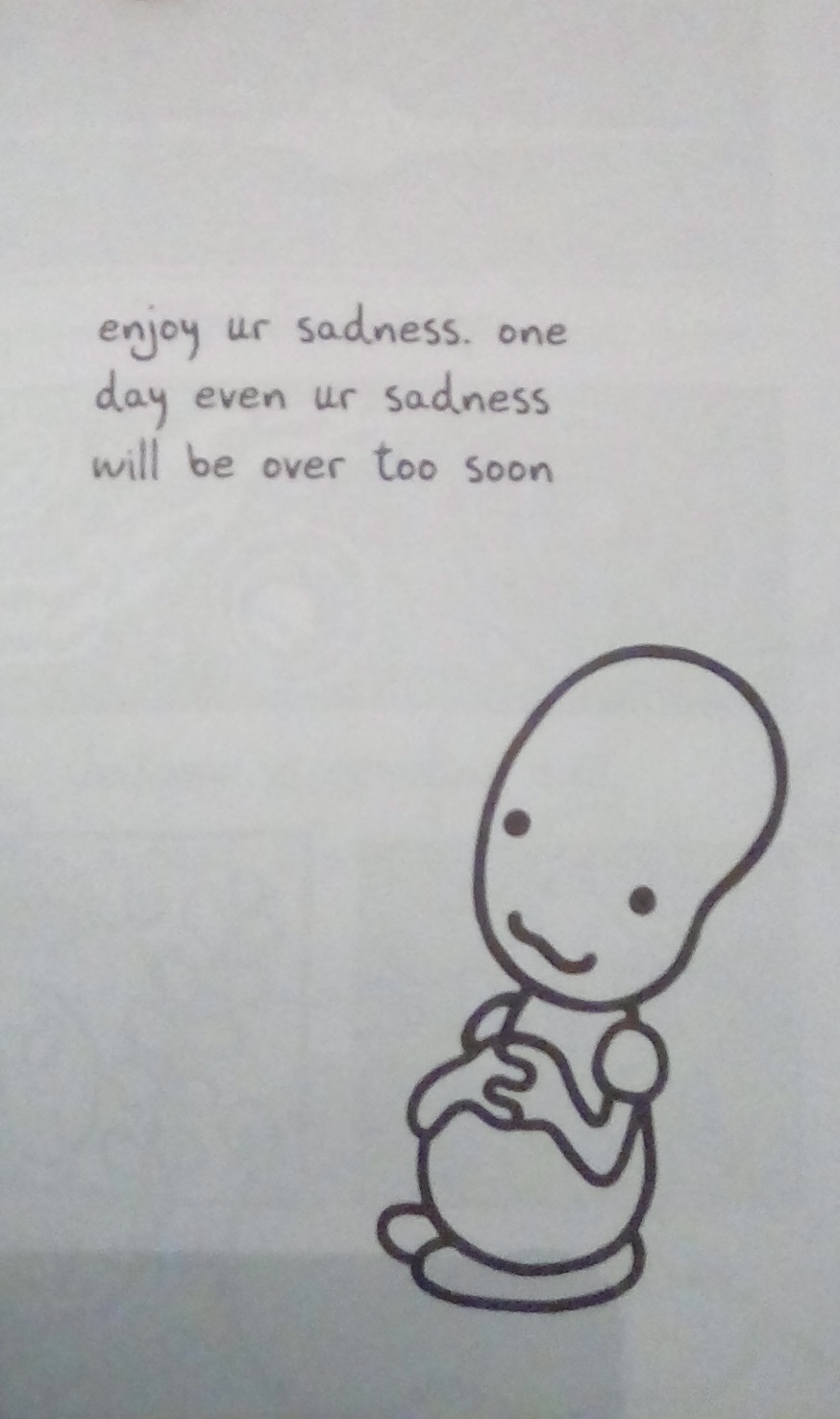 Consider it a Love Is... for the post-irony generation.

Bryan Lee O'Malley is a treasure. This book predates Scott Pilgrim or Seconds, but it's easy to see his hand. The character style is established and so are his themes.

In this case, what I thought was a metaphor for depression turned out to be literal fact. Maybe.

Anyway, it's young people dealing with crap in a world that largely realistic (and more so than usual here) and finding themselves in the wreckage they perceive about them.

I'm glad this tenth-anniversary edition was released, or I may never have come across this.

I mean, the matter that you read, my lord.

This is an impactful book. It spends a long time establishing the horrors of slavery so when the brutality of Turner's revolt happen, no matter how awful it gets, you can't get those opening sequences out of your mind.

The book is largely wordless, but the pages with words are filled with Turner's own words. And there's a seriousness and an honesty---almost,
at times, a holiness---to his language that it's not hard to view him as a peculiar amalgamation of Joseph Smith and genocidal Joshua

The result is beauty in ugliness.

I'm in the middle of Tim O'Brien's "How to Tell a True War Story" and his explanations of how to tell these stories seem appropriate here.


The truths are contradictory. It can be argued, for instance, that war is grotesque. But in
truth war is also beauty. For all its horror, you can’t help but gape at the awful majesty.... Like a killer
forest fire, like cancer under a microscope, any battle or bombing raid or artillery barrage has the
aesthetic purity of absolute moral indifference---a powerful, implacable beauty---and a true war
story will tell the truth about this, though the truth is ugly.

This comics recreation is a true war story.

126) A Wind in the Door by Madeleine L'Engle , finished November 7

As far as storytelling goes, this doesn't match up with A Wrinkle in Time. The philosophizzing and whatnot has completely taken over the text. I mean---it was fine, I guess. Elements were quite nice. But it dragged, oh la how it dragged. Eesh.

125) Live Right and Find Happiness (Although Beer is Much Faster): Life Lessons and Other Ravings from Dave Barry by Dave Barry, finished November 3

Here's the thing about anyone my generation who rights funny stuff: whether we mean to or not, we all steal from Dave Barry. It's kind of a relief, frankly, to read this 2015 book and see he's still got it. I laughed aloud quite often, and the letter to his grandson was genuinely sweet and touching. And funny. Dave Barry, friends,
is still Dave Barry.

(Also worth mentioning: he explained soccer to me in words I understand. Although he didn't say this directly, essentially it is this: every soccer game is a pitcher's duel.)

We went and saw the Munch show at SFMOMA. It was amazing. It was also amazing crowded, probably because we didn't make it until the closing weekend.
Because it was closing though, all the Munch stuff was on sale including this book for $12. If it had been under ten I would have bought it without thinking, but at twelve I thumbed through and saw too many boobs and penises and stuff to have it hanging around the house. So I went to the library instead.

The book's central conceit is that most Munch biographies have extrapolated way too much from the facts and turned Munch into a fictional character of the biographists' own imaginings. And so Kverneland decided that all the words in the books would be direct quotations from primary documents and the only interpretation would come through his pictures.

And what pictures there are! His characters are sharply angled---almost cubist---yet consistent and realistic. And this realism is a great choice for Munch because he too was realist but not. Plus, Kverneland does fun cartoony things like giving drunk people Xs for eyes. And he incorporates Munch's art, using his own artist's sensibility to show the development of Munch's style and compulsions.

This bio captured Munch for me and added to my growing enthusiasm for his work. My enthusiasm is unlikely to ever match Kverneland's. But it is catching.