I only recently became aware of this book and, frankly, I'm surprised I picked it for my trip. The recording the library provided was . . . imperfect. Some stories I skipped over for a variety of reasons (scratched tracks, noise issues with my car, one terrible narrator), but I listened to almost all of it and it was terrific. Reminded me a lot of Spoon River Anthology---its basically the short-story-collection twin of SRA, really. But it's like other, similar books as well. Dubliners is the most famous example, but I liked this much better. (Joyce: the most overrated writer of the Twentieth Century? Yeah. Probably. Even if he's good, he'll still probably win that race.) All three of these books, incidentally, were published in three years. So something was in the air. I've been trying to think what the modern version would look like, and I'm just not sure.

It's a small Ohio town and the people that live there. They lean towards the sad and lonely, but that doesn't prevent the telling from finding beauty. It's not a rejection of this image of Americana, but it does examine it very very closely with a squint.

all the way to sdcc and much of the way back

Audiobooks from the library for my 1000-mile journey alone! Book one: this one.

King really is the master of making small, everyday things otherworldly. I wouldn't call this a horror story though it has many of the trappings.

Here's the conceit: Guy gets a Kindle with the ability to download books from alternate realities. Imagine access to books your favorite writer only wrote in another world. Yeah. I know.

Anyway, that's the idea. If it sounds good to you, this might be the best king to start with. Not scary. Short. The perfect starter drug.

first leg of my drive to sdcc

Fante is a truly pathetic fellow and, best I can tell, his good intentions notwithstanding, a genuinely bad writer of the sort unlikely to improve. When you can plagiarize an entire novel without realizing you're doing it, you might not be the sort of idea-generator who can make it as an artist.

But that's how he loses.

Noah's treatment of him, however, is much kinder. Sure we see him honestly, but that honesty prevents us from hating him. For all his pretension, ego, silliness, hacksterism, etc, Fante's a real person and we feel for him. We don't hate him for his social and artistic blunders---we're embarrassed for him. And that's a much kinder angle.

nominated for an Eisner

Most of the time, Kinsey Millhone is in situations that might be dangerous and so maybe something bad could happen at any moment. In this novel, every moment is definitely dangerous and so the maybe-something-bad-could-happen-at-any-moment is exceedingly more stressful and worrisome. Beware accidentally going undercover with organized crime. Beware!

over a week, maybe over two


010) Folk of the Fringe by Orson Scott Card, finished March 9

We svithe after these things

Due to people being difficult what with travel and such, this week the ENTIRE BISHOPRIC pinch-hit spoke in sacrament meeting. The topic was the three parts of the Thirteenth Article of Faith. I like part three best so went last. This is a scan of the version I used. Relevant links follow below. 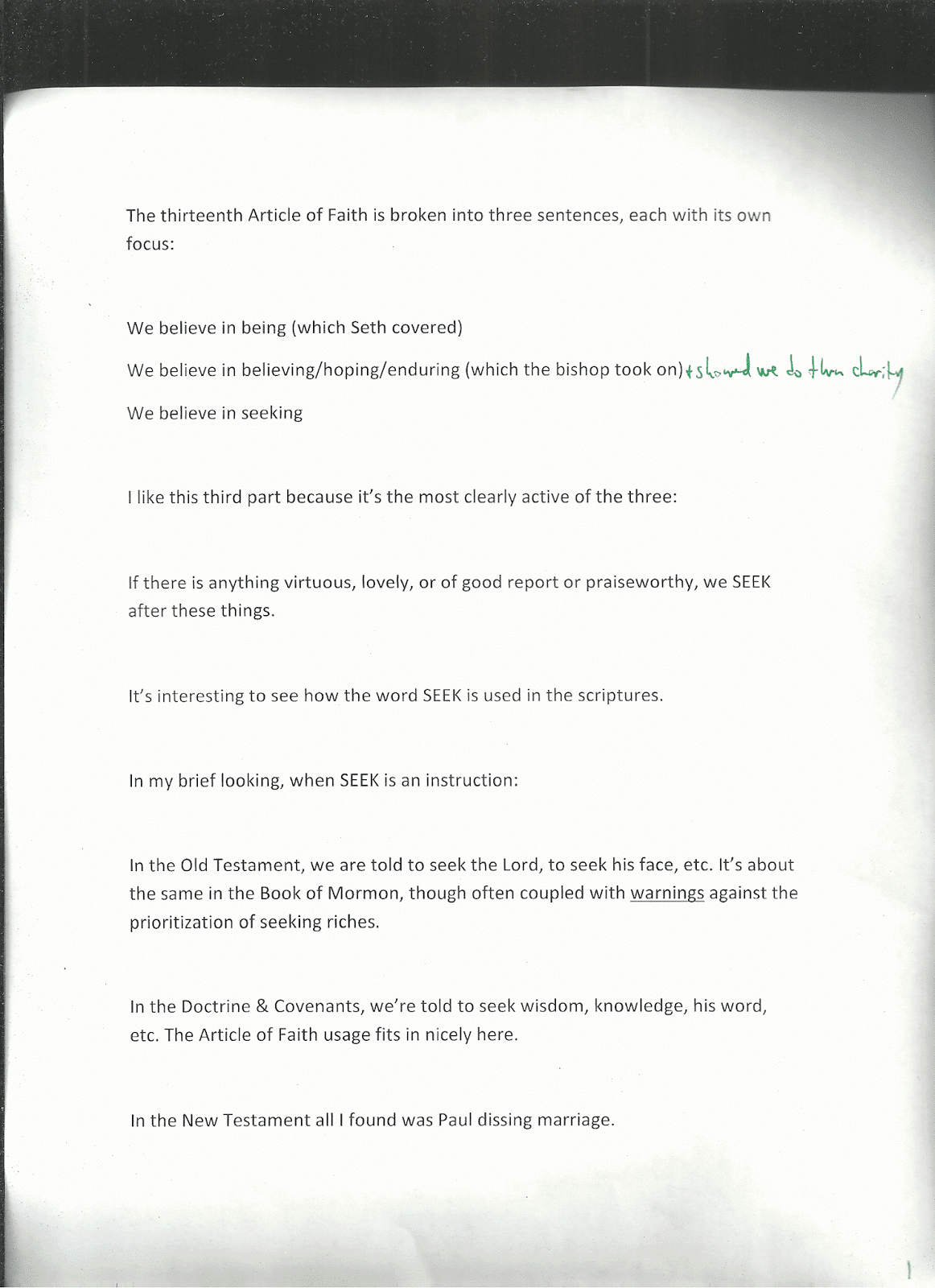 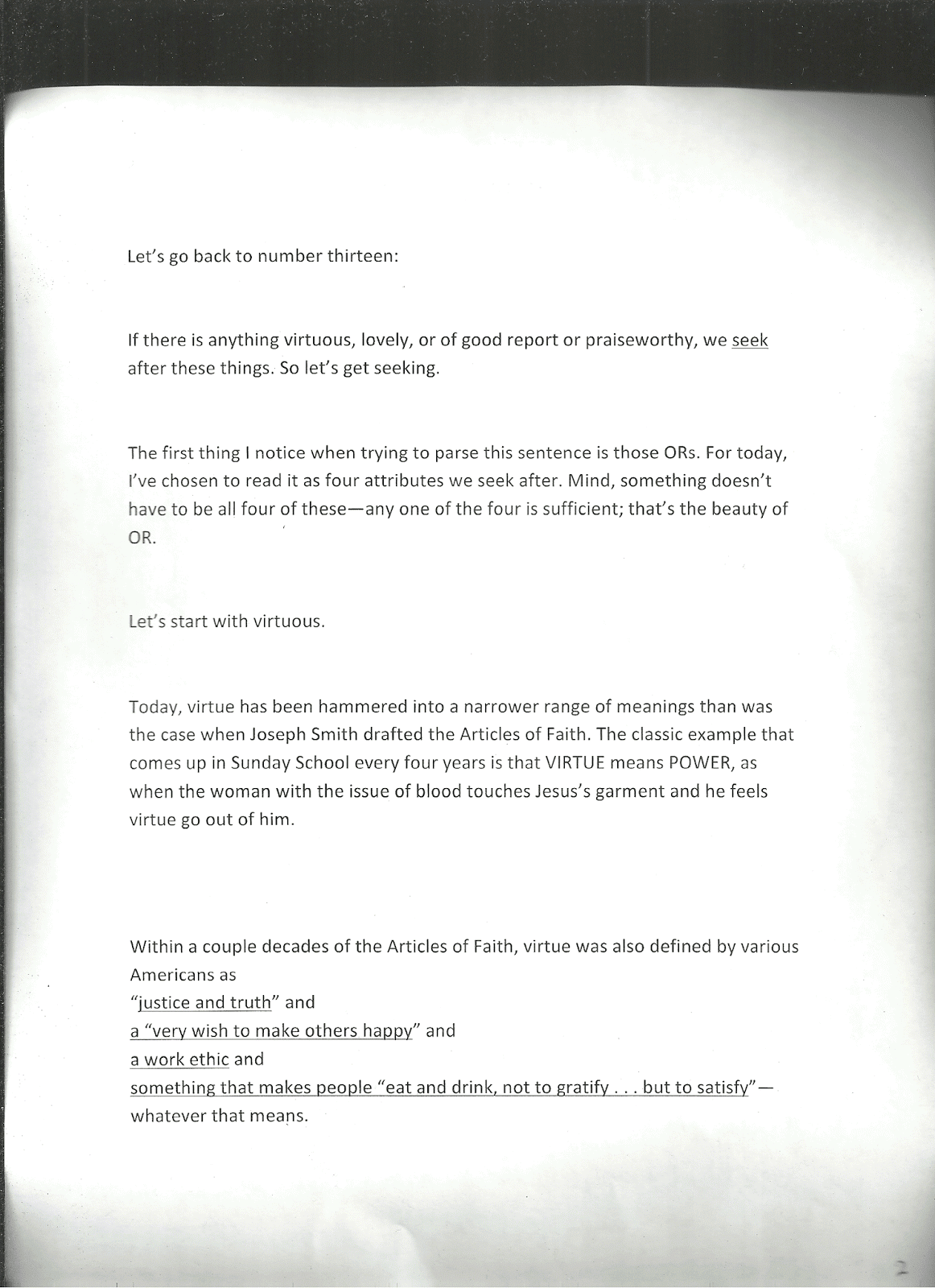 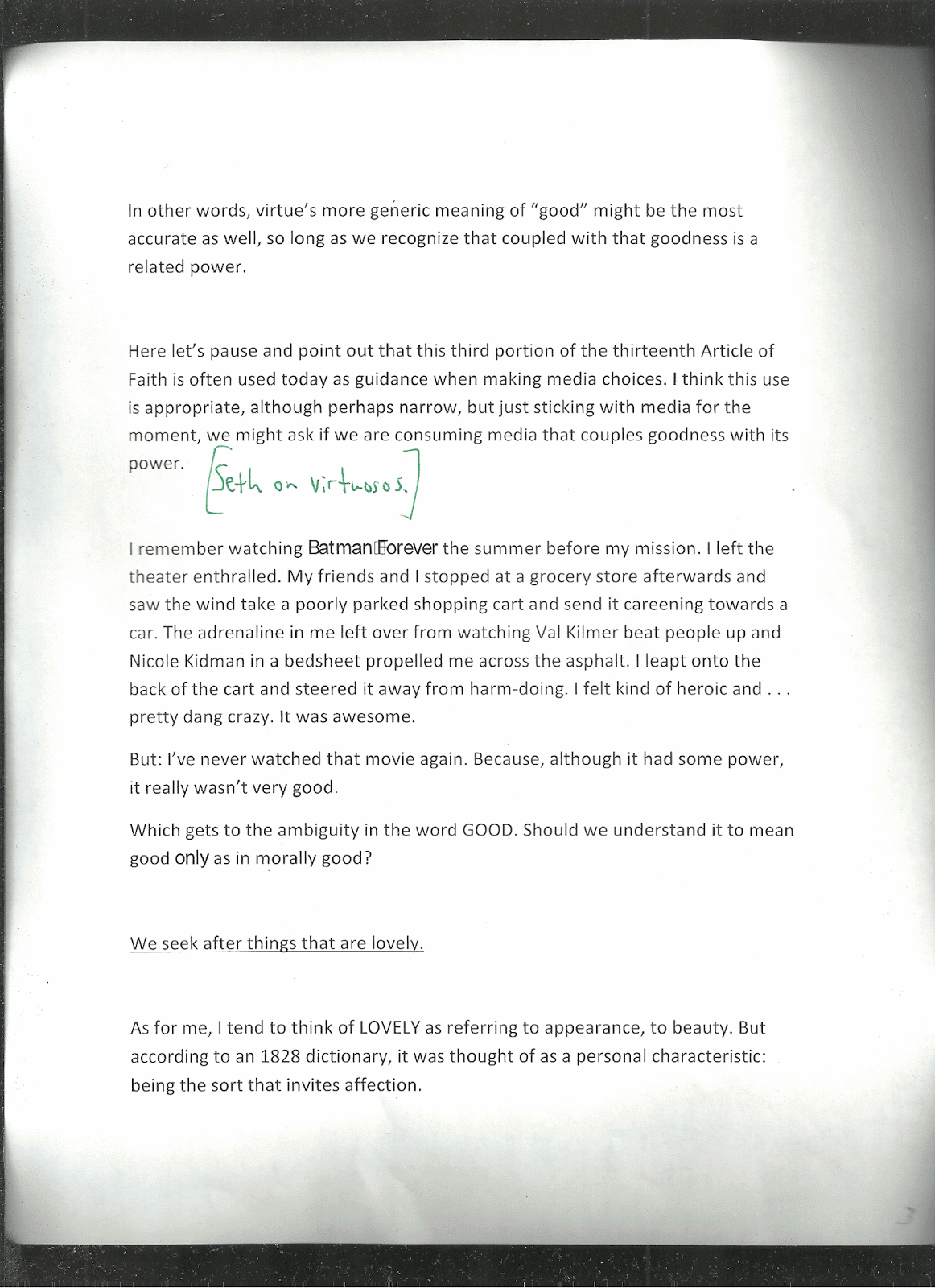 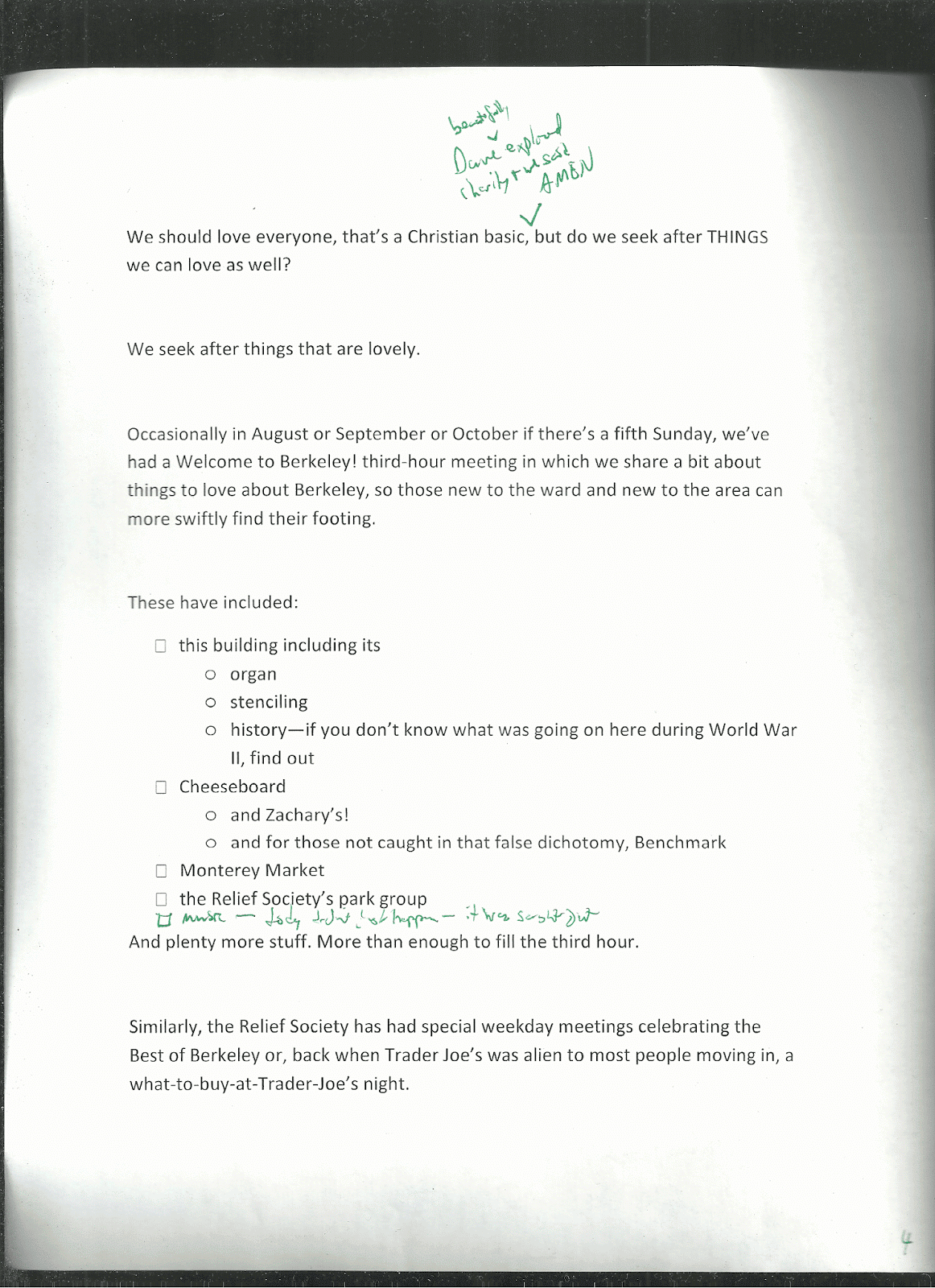 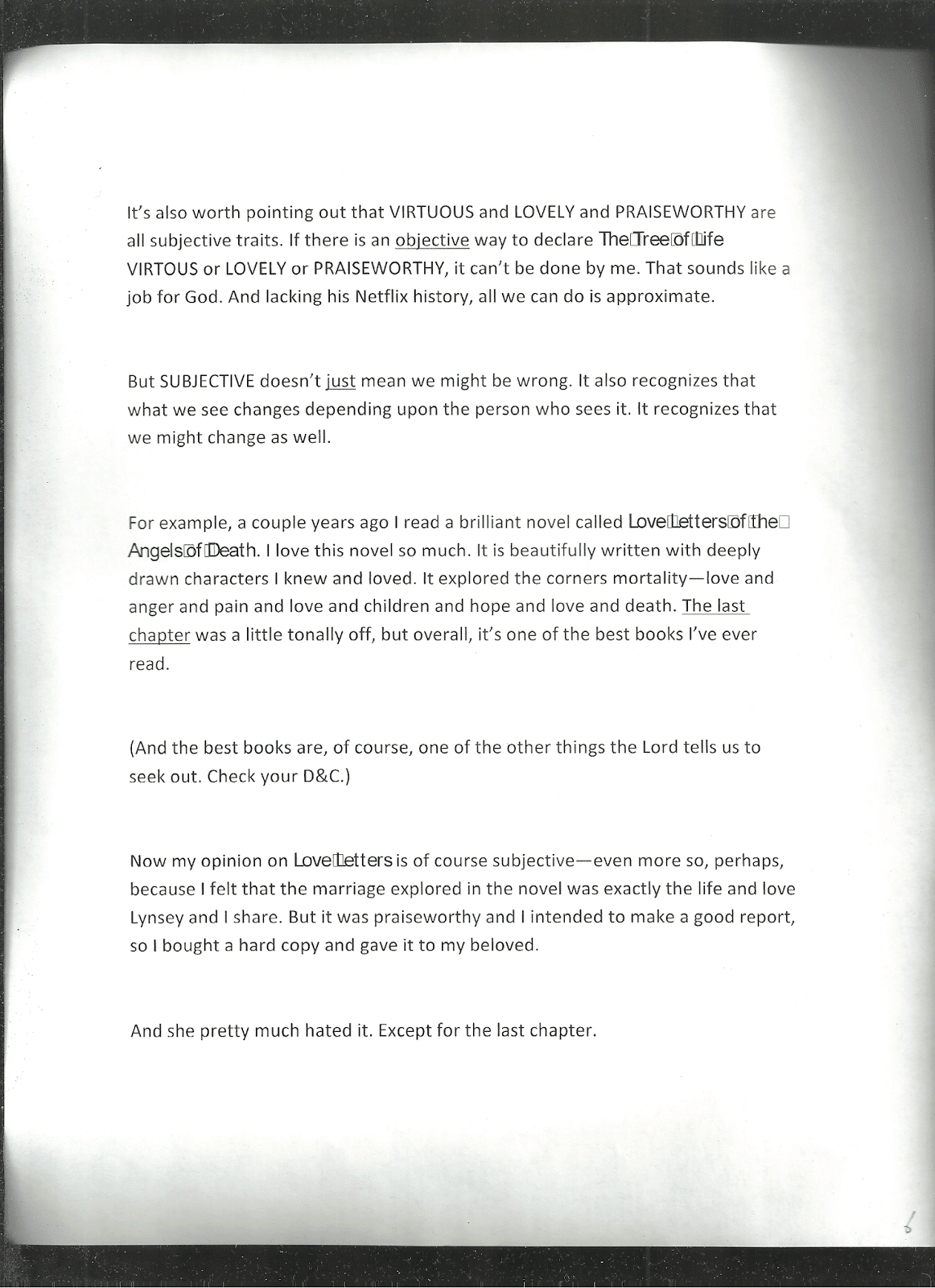 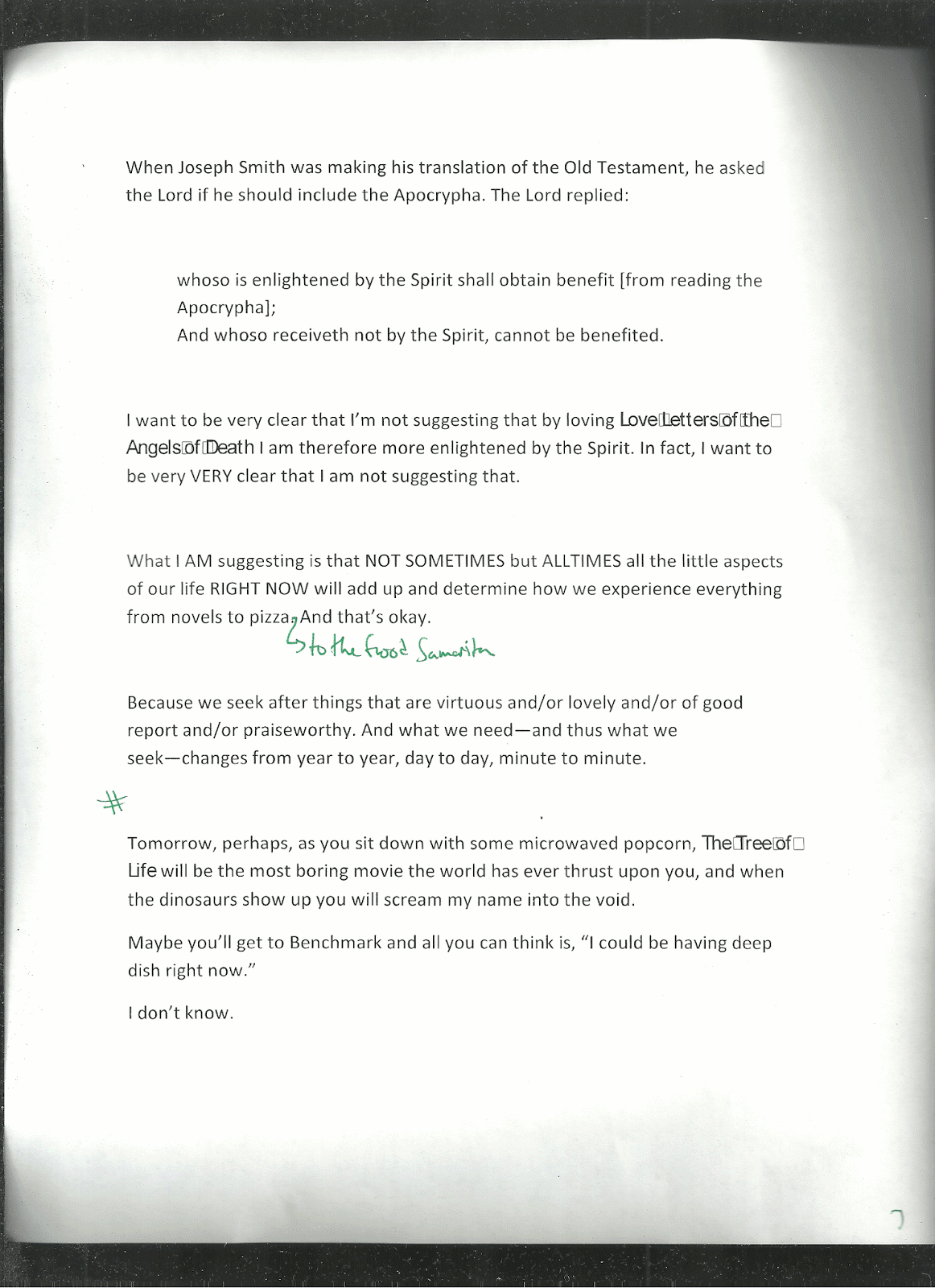 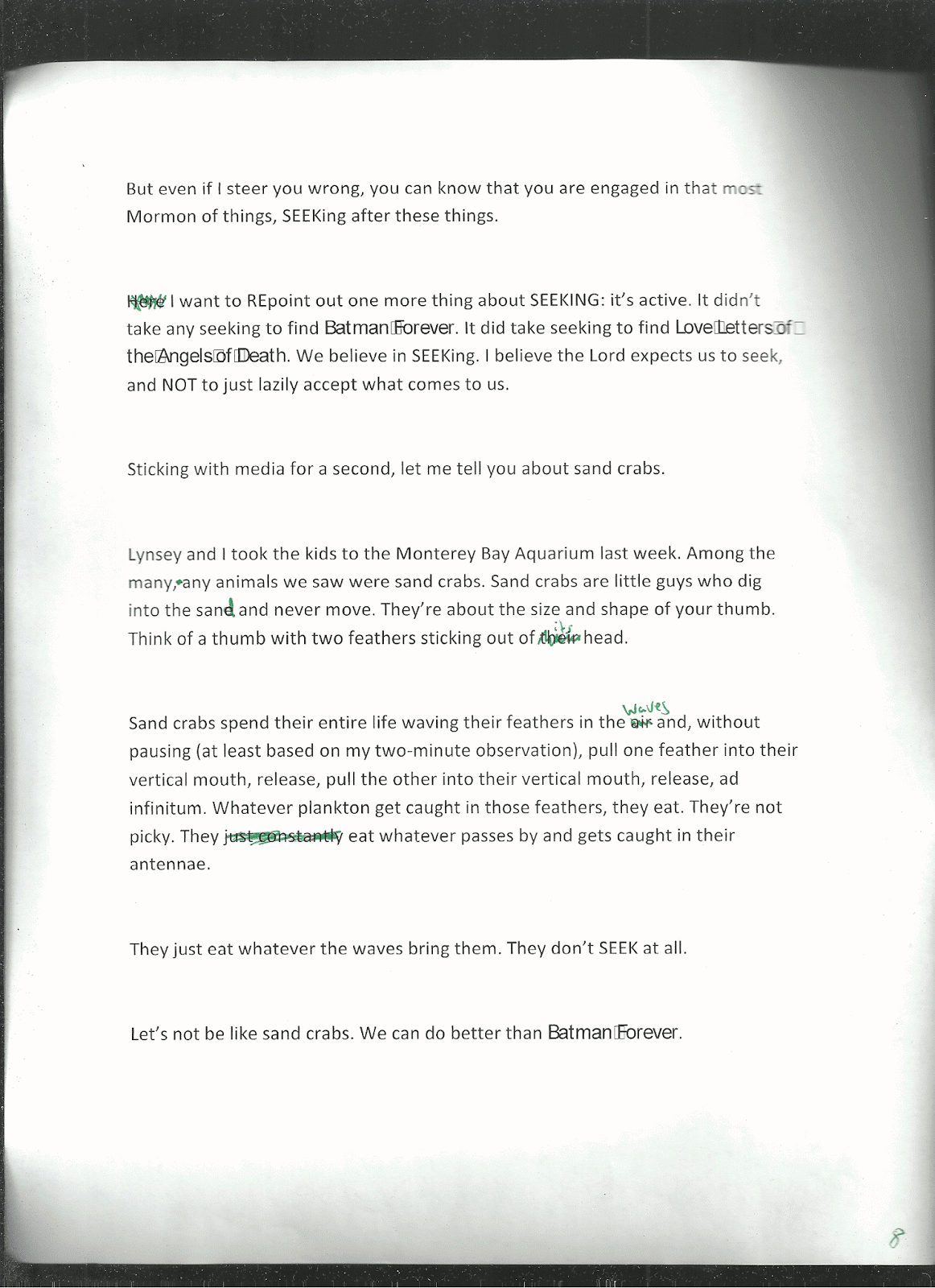 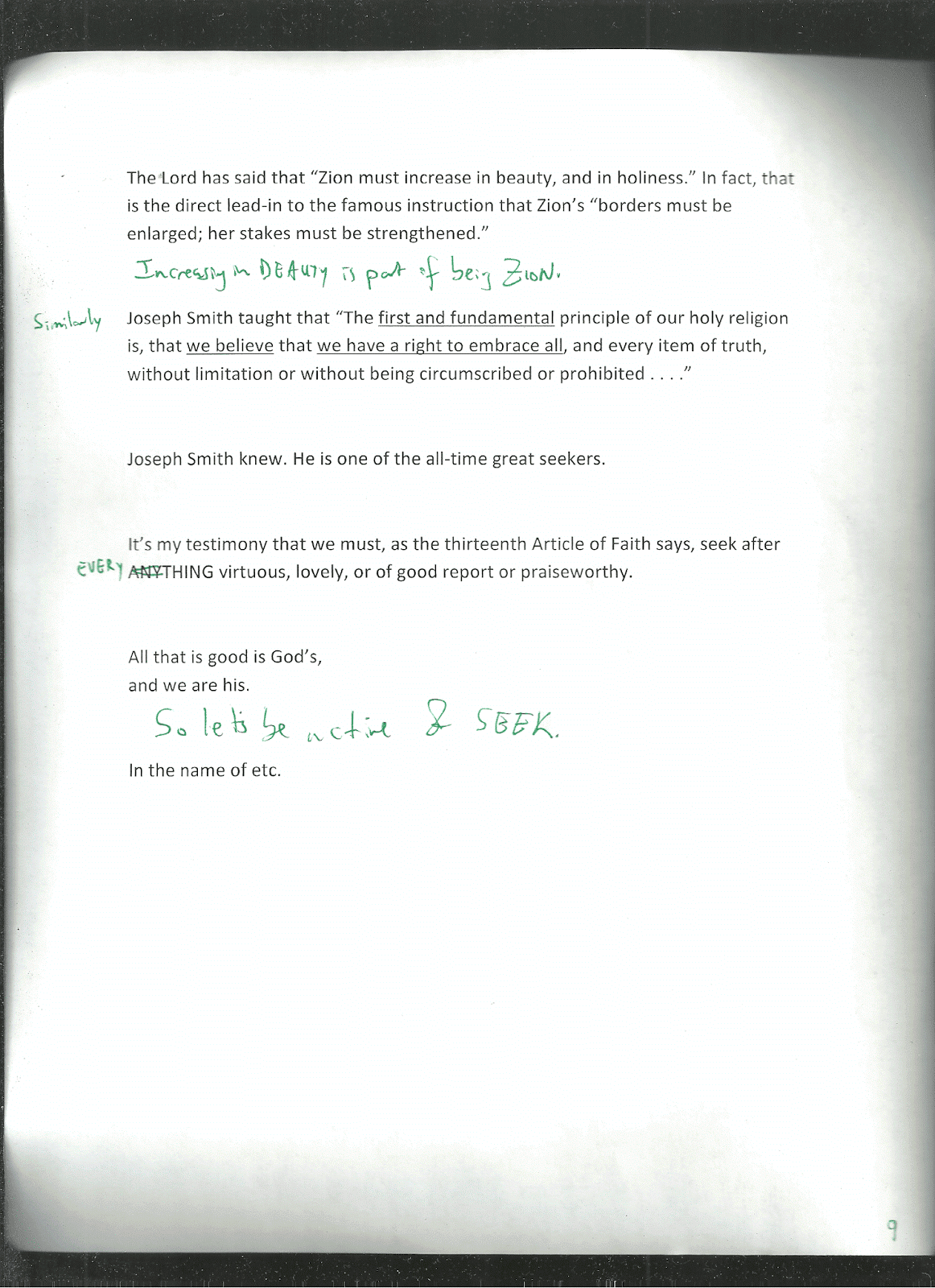 I'm done! I finished it! Alleluiah!

I have several issues with this book. I guess these are the main three:

1. The book unabashedly comes at Isaiah from an LDS perspective, which is legitimate, but it does so at the usual expense of other perspectives unless those perspectives offer a remarkable second witness to a specifically LDS standpoint. I would like to be challenged a bit more to consider others' thinking.

2. The book is maybe a bit too much of its time. The book was first published in 1982 and thus Spencer W. Kimball, it seems, is the likely target of many of Isaiah's prophecies. This also doesn't bother me too much (the nature of poetry and prophecy is often multiple applications) but it does make the book seem rather dated and provincial.

3. The book mentions the controversy over multiple Isaiahs but doesn't take it seriously. It recognizes the scholarly position but then just fights it with testimony. (I'm overstating this slightly.) I was hoping for some insight into the issue, not a feinting.

But there's a lot to like here as well.

Ludlow's narrative persona is avuncular---wise and welcoming and a bit longwinded.

The text incorporates ALL of the book of Isaiah (except for one chapter, weirdly, which quotes extensively from 3 Nephi instead), and for each chapter Ludlow selects the translation that seems to him to best capture the original. This is quite lovely, actually, to visit seriously so many different translations (including, for one chapter, a new translation of his own making).

Ludlow is a true scholar of deep reading, learning, and understanding. I don't blame him for sometimes adding more than is strictly necessary, but if you buy this for yourself rather than a course, feel free to skim portions.

And lest #1 up there get misinterpreted, I appreciated the LDScentric look at Isaiah (I just wish it hadn't been to the near exclusion of other perspectives).

It was a long, long read, but I made it. I don't know if I would recommend it over whatever the competition is, but if you want an LDS-based 1980s look at Isaiah to round out your Isaiah library, this is a good choice.

This is one of the books on my nightstand I was specifically thinking of when I made the exception to the no-new-books-rule for books I should review. I had planned on taking Karen Rosenbaum's new book with me to girls camp but I couldn't find either of my copies, so I took this instead.

And I loved it! Although thematically it tastes a lot like Quist's other novel, stylistically, it's much different. For instance, it swings through five different points of view and balances a large number of major characters. And does so beautifully, I might add. Everyone is very much recognizable as themselves. I spilled a lot of red ink on its pages and should really write a serious essay on it, but I have so many options when it comes to things to write about and so few people urging me for an essay (not to mention several utterly unrelated writing deadlines looming) that I'm not sure I'll get to it.

But if you're, say, one of Shelah Miner's students and want to write a killer essay on Sistering, here are some options that I would consider were I you (some will be better at supporting the weight of an essay than others):

This novel uses language (words and phrases, for instance) to wrap through and around the text, touching disparate moments and connecting them.

"But when it comes to family, what does what we deserve have to do with anything?" (216)

How necessary is physical, geographical closeness to emotional, familial closeness?

This novel has a curious and subtle way of jumping forward in time without lurching. Discuss the mechanics of this.

The use of color!

Although perhaps not usually obvious, this novel shows the same aversion to naughty words that Dean Hughes's books show. Is that purely because it's appropriate to the book's aesthetic, or is this Quist's Mormon showing?

Although hardly a laugh-riot, the book is ridden with humorous lines, presentations, and situations.

Quist is the Queen of Death. This second novel establishes her as one of the great modern explorers thereof. Book One was explicitly Mormon if you know the codewords. This one isn't. [How] Does that change the results?

What, if anything, does family "owe" one another?

We all fill different roles---both for others and for ourselves.

Suzanne escapes "all that horrible justice"---should we be satisfied by that? If we are[n't], what does that say about us?

Which world[s are] made possible only by forgiveness" (296)?

It's a really good book, guys.

If this had been, say, a library book instead of a gratis-for-review copy, I probably would not have finished it. But by struggling all the way to the end, I have the answer to the question I've been asking: is Sue Grafton actually any better than her competition? The answer is yes. Hirahara is an Edgar Award winner and this book was hard hard hard to get through. First, I didn't care about the mystery. I really had no interest in whether it was ever solved. The interweaving of some history I'd never heard of (and isn't easy to find a good webpage thereon) couldn't save it. Nothing about this book intrigued. Most of the characters didn't live, the transitions made me think the author was just checking boxes on her outline, and the baseball was absurd. Would you, for instance, in the bottom of the ninth, send a pitcher to the plate? Of course you wouldn't. And a boneheaded error like that can make me question everything else (even if I hadn't been already). Nothing rang true in this book. It read like a film treatment rather than a novel.