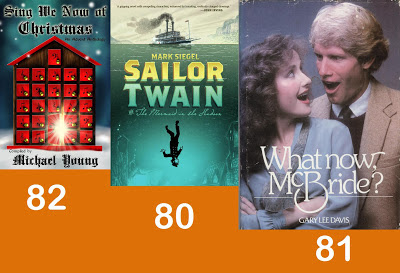 Holy smokes! The year is over! Caught me off guard so I'm publishing this a few days late.

082) Sing We Now of Christmas by Michael Young, finished December 29

Lady Steed noted that I was sighing a lot when I started reading this collection of Christmas tales. And she's right. I was. But as I read on, the overexplanations and overthetop cheesinesses of the book mattered less and I was able to just enjoy the purity of intent. A Christmas miracle!

The stories vary a lot in terms of skill, but that's not surprising since several included authors have published multiple novels and several included authors count this as their first publication. And sometimes the quality was confusing. One of my favorite stories was Ryan Larsen's take on the Wenceslas legend, but at the same time, its frame story was confused and inconsistent.

The book's proceeds go to charity so I don't want to be unkind. In short, I enjoyed the book very much. And I mostly kept to it's advent nature of a story-a-day (though I didn't get the final tale read until well after Christmas thanks to family and travel). I think it's a great way to structure a Christmas anthology and you should consider it for your own befrosted heart. Or contributing to the next edition. (I happen to know that slots are filling fast.)

about the length of time it was supposed to

About ten years ago I found a copy of this novella at the DI. With its crazy cover and protagonist named Nephi and conversion/romance story, it seemed such a snapshot of Mormon lit in 1982---or at least it backed up my assumptions---and I've always regretted not buying it.

We drove to my parents for the days after Christmas, where my dad presented me with the copy you see scanned here. He was excited by this find---a discard from the ward library---and wanted me to read it. It was cheesy and silly (in the second sense) but only 99 pages so I should totally share his experience.

You can read more about it on A Motley Vision.


I did not anticipated the epic length of this book when I ordered it from the library.

You can click the image to read the first few chapters.

The advance praise from a healthy variety of luminaries made me hope for something I had been looking for.

But they're all engaged in similar postmodern plays against time and narrative. So my first hope when I saw Sailor Twain's girth was that it would be a truly great novel in the traditional, storybound sense.

And I though it would be for most of the book.

Sailor Twain is truly epic and beautifully drawn. It drips with symbolic moments, but sometimes those moments drip off the side of the boat and I can't quite tell where they're headed. Take the matryoshka dolls, for instance. Great idea. Not quite sure where it's headed. And if Lafeyette's last love is his true love, then . . . what about the other six? And if that love is greater than all the others, then what the heck?

See, one of the primary themes under consideration in Sailor Twain is fidelity. Twain loves his wife, with whom he has a longstanding love, but is gradually seduced by the mermaid. And the novel can't decide whether that is tragic or awesome. But not in a pleasantly ambiguous way. In a confused sort of way.

Similarly, Lafeyette's been substituting sex for love but then love appears instantaneously? Isn't that the opposite of what we're getting (or not getting from Twain?).

One argument to make here is that Sailor Twain demands multiple readings to release its secrets. That may well be.

I'm satisfied waiting for Siegel's next book and seeing if he's figured out what he's trying to say.

All that said, I much of the novel and much of the story. In fact, it wasn't until the advent of deeper magic (which you think would be find in a story about mermaids fer gosh sake) and the plummeting collisions that constituted climax and finale and denouement and epilogue that I lost my way. A shame.

I really thought I was going to be pushing this book into your hands.

Read the review of 67.
067) Up the Down Staircase by Bel Kaufman, finished November 6

Read the review of 56.
056) The Garden of the World by Lawrence Coates, finished October 5

Read the reviews of 40-43.
043) How to Analyze the Works of Stephenie Meyer by Marcela Kostihova, finished August 13
042) The Absolutely True Diary of a Part-Time Indian by Sherman Alexie, finished August 10
041) Captain America: Man Out of Time by Mark Waid and Jorge Molina, finished August 1
040) If You Believe in Mermaids . . . Don't Tell by A.A. Philips, finished July 28

Read the reviews of 25-28.
028) Perks of Being a Wallflower by Stephen Chbosky, finished May 24
027) The Lover’s Dictionary by David Levithan, finished May 16
026) The Guernsey Literary and Potato Peel Society by Mary Ann Shaffer and Annie Barrows, finished May 10
025) Dominant Traits by Eric Freeze, finished April 10