This is a beautifully shot film. And it makes some impressively interesting choices (the kids with the Weird Sisters, the ghosts of Macbeth children). But ultimately it's a film for people who already know the play, the story, the characters, etc. As I was watching it, I often suspected I would be utterly lost if I didn't already know the next step of plot. Given that my students, pretty much universally, were lost and confused, backed up my suspicions.

To you teachers out there---this would be a better film to show after reading the play. Then they can debate the choices made. To watch it first? Well, it'll raise plenty questions for the reading to answer later.

Okay, okay. I see why it's lesser Disney now. But it's still fun enough and my kids liked it.

In addition to being a movie-to-see-as-a-kid-or-you-won't-like-it though, it also hasn't aged supergreat. For a timeless sorcerer, Merlin's hella eurocentric.

Also, I'm not sure this thought had really occurred to me before, but the Genie is clearly a descendant of Merlin: 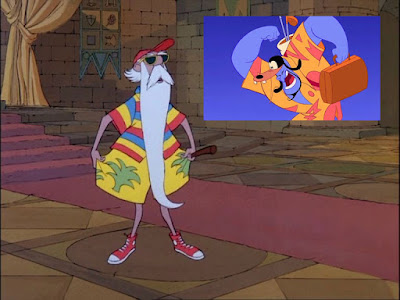 I wish we weren't so stuck on "realism" these days. It would be nice to see some stained cloth playing sky, for instance. Some things set on obvious sets rather than on location or a striking facsimile thereof.

Let's step away from the real! We live in an era of superhero movies, for peak's sake!

I did not want to watch this movie for exactly the reasons it ended up being so great: I've no desire to revisit the horrors of being thirteen. Which it captures so, so well.

But it's not just universal. It's also specific.

The cellphone usage is quasisatirical, but only barely. I would call it pretty accurate.

Fun: after finishing the filmclub viewing, our president said a) you were all this accurate and b) go home and hug your parent. And the Big O in that moment walked over and hugged me.

I've now watched this three times (first, second), if you can count this as watching. I was largely listening to the director's commentary by Jared Hess. Who began by predicting no one would listen to said commentary. That's about as valuable as it was as well.

Jerusha was also supposed to be there, but their kids had stomach flu the day of the recording so nope. Which is a bummer. I imagine it would have been a better commentary if Jared could have bounced off somebody.

He did talk a bit about the inspirations for the story (including Mark Hoffman) (but not including Ron Wyatt, sadly), but it was scattered and disconnected, alas.

I haven't seen this movie in aaaaaaages. I'm much more film literate now. So, for instance, I can see visual references to 2001 in the early scenes. But the much more interesting comparison is to the movie that came out one year earlier: Star Wars. Starting with the Jonathan Williams-penned overture upfront, the similarities keep coming. Rural setting. Having to do chores rather than go driving. Dead father figure. Exploding planet. Magic powers. Clark even inherits his father's lightsabre! (If you haven't seen the movie in a while, you might doubt me, but he pretty much exactly does get his father's lightsabre.) Margot Kidder even has a similar voice to Carrie Fisher. (How cool would it have been to have them play badass sisters?)

One thing I utterly did not remember is the poem during the flying-together scene. It's cited like a song in the credits. And ... I don't know. Lady Steed said she was utterly bewildered by it.

And the final act still a mess of nonsense---worse even than when I was a kid. The time thing didn't really work for me as a kid, but the problems with space and time start from the moment the missile goes off. None of that chronology really makes sense. And Supes's manner of prioritizing is absurd. (Apparently, this is where many of my wrongheaded ideas about earthquakes were born.) Then, if he's going to move time backward, why not far enough back to stop the missiles altogether?

I will say that Christopher Reeve is terrific. Even though the script isn't always great (poor Jimmy), Reeve is great. He's the modern superhero archetype and he deserves to be.

I've seen this a good many times now and feel qualified to make some judgment calls.

First, the acting is incredible, across the board. The performances improve with rewatching.

Second, why is the camera so active? I noticed it a tad on earlier watchings, but now the multiple angles and slow zooms (especially---almost to the point of constantly---on Troy).

The most idiosyncratic camera choice has grown on me, but a couple other choices (eg, the neighbors' window) still don't make sense.

I'm glad scenes with Alberta and Troy's father didn't make the final cut ... but I'd sure like to see them.

This is a pretty fun ride. I never imagined a Macbeth this old, but it works pretty well. Good casts can do that.

ALL THAT SAID, this is waaaay too long. Three hours? You have to be kidding.

As a stage-to-screen adaptation in the BBC/PBS tradition, this looks terrific. But ... it's too dang long. Even though I liked many of the choices (combining/splitting characters, frinstance). And check out the witches.

It's been a looong time. I think, largely, I like it better now than I did twenty years ago. What's interesting, though, is to judge it through some modern lenses. For instance, how Jodie Foster's character (and the other female cadet) have to navigate constant sexual harassment of varying degrees just to get through the world and live their lives. Now, of course, this is parcel with the themes of the movie, but one gets the sense it wasn't far at all from ordinary.

One complaint the movie has been getting since the beginning is that it doesn't represent ______ well. The thing in the blank has changed over time, and I'm certainly not willing to tell someone their experience with the film is wrong. I do think that the film is doing something complex with Buffalo Bill, however, starting with Hannibal Lector's insistence that Bill is not transsexual and ending with the easy crossing of the Bechdel bar, even though much of the film has Clarice alone in rooms filled with men.

My own reading is that the film is an attack on the sort of attacks the LGBTQ+ community was (communities were) upset about. It's difficult, to show something as one way and expect anyone else to see it another way. Silence of the Lambs isn't a broad satire or morality play or anything so obvious as that. What it "obviously" is is a horror film about a guy who makes suits of women's clothes in order to be something other than he is. And no matter what commentary may be in the subtext, it's easiest to see what's there lying in plain view. If that hits a sore spot, not much you can do. Because it is also exactly what they say it is.

It's an interesting problem from a critical standpoint. Maybe intractable.

I still haven't found a Macbeth I can show year-in/year-out like I have with, say, Romeo & Juliet. And I'm not sure why. I don't know why they don't work well enough to through at fifteen-year-olds.

The cover also promised Ian McDiarmid as the porter. But long before the porter arrived, I was asking WHO THE HECK IS PLAYING ROSS. Ends up there was some doubling in this movie. C'mon, BBC!

What a way to close the AML conference! We followed it with a Q&A with director, screenwriter, and a producer. I intend to mull over it some more before really writing about it.