As books go, these are passing good

And with this I've read ALL the AML Award-nominated comics (sort of---I probably haven't read ALL of Brittany's collection, but the other three, sure). Thematically, it's somewhat reminiscent of Tara Westover's Educated in that it's the memoir of a Mormon kid who grows up and away from the faith, but Noah's story is very different. 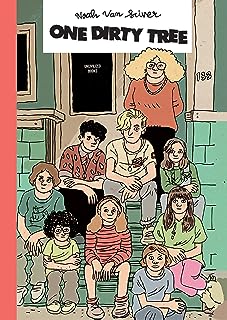 For one thing, although he is less isolated overall, his relationship to church membership is unlike Tara's as she lives in a Mormon town and has Mormon relatives. Noah's parents are converts living in New Jersey. His father is diagnosed with the same mental illness as Tara's but if you ever wondered if all bipolar manifestation is the same, here's your answer. (No.)

Noah's is a strong work, but he's not as far along in the process of grappling with his upbringing (and arguably has not equipped himself with so many tools to do so).

I don't have a say in the award, but in my mind, it's between One Dirty Tree and Green Monk.

A fun thing for me personally with both books (as well as the other three, for that matter), is that my intimacy with their work gives me a lot of intertextual pleasures. But you don't need that kind of background to enjoy any of them.

(One side note: Tara spends a lot of time noting that her experience is not typical Mormon experience. Noah only hints so and it's clear he's unsure how far from normal his experiences might be. If you find generalizing triggering, you might be upset by his retelling.)

two days, possibly not next to each other

I ended up deciding to put the second on hold because Lady Steed wanted to read it (even though she didn't like the characters any more than I do). And how does it compare to #1? About the same. Any question of what's real doesn't feel much resolved. The characters are still awful. You know.

I grobbed this one off the hold shelf as the librarian was checking #1 back in, and she got excited when she saw it. She told him about how great it was (the characters are all Instagram models!) and she made some good points, eg, that the main character is outwardly beautiful but has awful allergies which makes her ugly in private so irony or something. It made sense as she was saying it (if oversold) but felt less true as time passed and I read on.

Which isn't to say I hate it. Sometimes it has something to say. Frinstance: 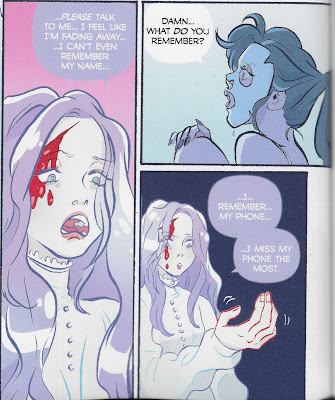 And artist Hung said something in her book-ending notes that's worth repeating: "Maybe they're not good at being friends, but they are friends."

I can accept that.

I can tell already this one will stick with me for a long, long time.

This isn't the world I want to live in, but hey, America---this is us. This is our world. Most of us can glide by easily enough, but many of us---more all the time---are touched by disaster. And some of us who aren't are consumed by conspiracies and nonsense and bad thinking that feels truer and safer than the already hellish---but chaotic---facts that surround us.

In short, this is a book about the murder of a woman. Not the woman herself, really. Not her murder, we never see it. But about the madness that surrounds violence---and the particular breed of madness that exists now, today. And how, once you start seeing the world through that lens, even the most everyday and innocent moments can be nervewracking---on the cusp of the next bout of violence. See here: 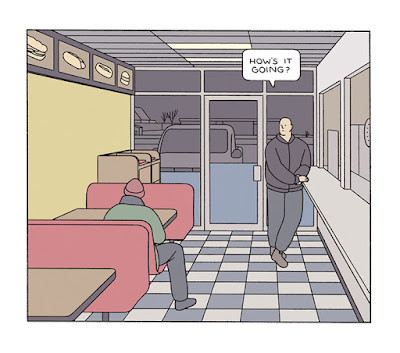 This book did not attract me on its own merits. The art wasn't interesting---Chris Ware plain, but ugly, and who needs to read a comic about a snuff tape? But it kept getting covered with laurels by mainstream outlets and nominated for awards of all types and, eventually, I felt obligated to pick it up. I'm very glad I did. Drnaso has captured the mundane and turned it into a horror show without making the world scarier than it actually is. Most days are totally safe. Most people are good. Danger stays far away and abstract. And thank God. Because when the unusual day, the unusual person, the danger does arrive---

I'm going to be haunted by this book for a long, long time.

I love reading plays aloud in class! We have our very best discussions talking about plays. Enough so I'm tempted to make all literature in-class literature. It's hard to imagine abandoning novels, but plays are so great. So great. I don't know a better way to have deep and challenging discussions.

It may never get old, being with students as they react to this play for the first time.

027) N Is for Noose by Sue Grafton, finished Ides of March

I had to close the book and go to sleep at a moment of true Hitchcokcian terror, the crushing pressure of smalltown malice. And I couldn't sleep. I could not.

This is one of the best ones. There are a couple moments I had to say, Come ON, Kinsey!, but not many. I think getting out of town was a good choice.

at most a week