001) U Is for Undertow by Sue Grafton, finished January 4

First, I've been complaining, the last couple of volumes, that Grafton dropped the estranged-family plotline. It came back in U and, although it didn't take up that many pages, they were effective pages, effectively changing all the rules and making the last paragraph something of a tearjerker.

I've also "complained" a bit about the change in use of p-o-v—in the early novels, Kinsey is the author of the text. The novel is her first person narration. Lately, she's adopted the thriller convention of alternating p-o-vs with the villain. These parts tend to be in third person. With this book, she's expanded to additional p-o-vs as well. It's a fine form, but honestly, I miss all-Kinsey-all-the-time. I had been looking forward to reading X, a serial killer novel in which we can't be sure who the killer is or what they're up to throughout because we know only what Kinsey knows, but it looks like I won't get that wish.

Anyway, although I miss the old form, this is another solid entry in the series. It reminds me of Q in that it's based on a (not real this time) cold case. The reliability of her sources waxes and wanes but, because of the alternating chapters, we always know when she's on the right track. Dramatic irony's great, but I miss being on the journey with Kinsey, rather than just watching her journey. (Have I said this already?)

She does make one of the alternating-pov thriller writers a villain this time, so project that as you will.

This is the most metaphorical of the titles thus far, which is also an interesting touch. I like that she's still playing. Even when I miss the casualties of her play.

This has been showing up on best-of-2021 lists and its the first such comic to end up in my local library system. So I threw it on hold and now I have read it.

Far Sector also carried the added appear of being by N.K. Jemisin whose recent reign of sf awards has been much remarked upon and I've felt find of bad, not sampling. But this is perfect for sampling! For instance, it has pictures and isn't five hundred pages! Very attractive.

Plus, who doesn't get excited about a new Lantern? 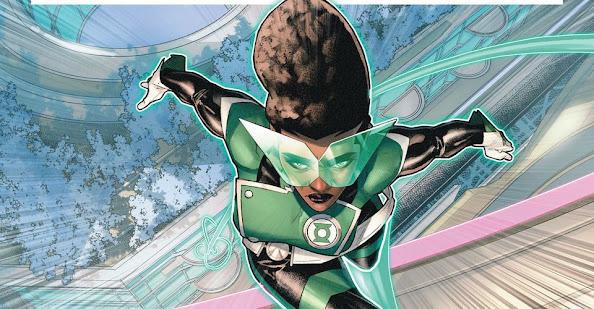 The world Jo Mullein has been sent to is far, far away—much further than Lanterns are usually assigned. And she is alone on a strange world.

The world is strange, but it takes time to fully grasp the implications of that strangeness. Every alien world should be strange, but alien worlds also have to be close enough to our experience so we can find out way inside. Different writers find different balances. At first, I thought this one leaned much further to the latter, but as the story continued, I liked the balance better.

It doesn't seem likely to stick with me at all, but what I did like was the impression it left of a great mind at work. It does feel like the mind of a novelist though, trapped in the strange world of comics.

I have a great deal to say about this excellent historical novel-in-comics but I don't want to say too much here because I want to consider other venues where I might sing a bit more loudly. We'll see.

In short, it's excellent and I'm not cancelling my preorder to get the hardback.

I was reading an interview with an editor I'd had a pleasant exchange with (I would link to it, but they actually mention it several places and I haven't found the one I'd seen before. Just look for nff noir sanxay and all the top hits will be relevant) and decided to see if the library had it. They did! And it deserves praise like "Goes up there on the list of classics alongside The Postman Always Rings Twice, The Maltese Falcon, The Long Goodbye, and A Hell Of A Woman." I absolutely loved how much danger and menace and chaos came to this woman, and how her mind failed her (realistically), and all the heroic things she was trying to do for her family, and the development of those relationships, and how they pushed her further into, what in lesser hands would be termed, madness.


005) The Art of Perspective by Christopher Castellani, finished January 11

I don't know how I ended up on Bookshop's page featuring these books (they're a bit behind in their cataloguing–there are more), but I decided I had to read one. So I picked the one I thought looked most interesting / most connected to my current aesthetic concerns and went to see if my library had it. They did! Then I just searched for "art of"—which brought up a lot of noise but several other volumes from the series, all of which I put on hold (as well as a few other Art of _____ books that were too tempting to ignore). All of them are so intriguing that when I decided I had better start with the one that first attracted me and not look at the others until afterwards, I picked this one up, certain it was the one. That it wasn't the one hardly mattered. I enjoyed reading this very much. 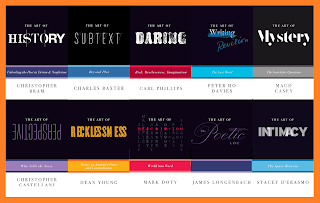 It was much less prescriptive than I'd feared. Much more descriptive in fact, which is great. Books for writers don't all need to be textbooks. I like it when I get to explore a writer's mind through their own explorations—what they have read and what they have discovered. Castellani is a fine host. I didn't love every chapter equally, but he did give me new tools, new ways to think about narration and narrators and why I like the stories I do.

When I've been saying that what I like in a novel is its language and its characters, Castellani argues this is perspective. And I realize he is right.

I read me a Bad Kitty book every now and then (everyone should) and part of their delight is the way different forms of storytelling interact with each other. In addition to two simultaneous narrators, the books feature a mash of prose and comics and other things, like lists. They are witty and delightful.

I'm not sure when the books moved into color, but I personally don't prefer it. There's nothing wrong with it and I'm sure it'll be commercially great, but I like the black and white.

Also, and it seemed to be connected to the change of setting, my favorite narrator was missing from much of this story (which is about a plan hatched by chickens to create a Hello Kitty / Disneyland thing to turn people against cats and toward chickens; most books in this serious are not quite so . . . high concept). So not a tippetytop Bad Kitty but still fun to read.