If these are the last books of the year, we can celebrate the new year satisfied

It's no secret I think Jeff Lemire is one of the best things we have going. Since my first gush, I've been a serious fan. And I love it best when he does his own work, words and pictures. His art is painful and his words draw blood and the combination is deadly. And he navigates so cleanly from realism to magic—he may be the greatest North American realist I know. (We can debate this later. The short list is long.)

This is the story of a family shattered twenty years ago by the death of the youngest child. They all find themselves back in town when dad has a stroke. (Only one, it's worth mentioning, ever managed to leave.) And they navigate their depressed hometown and radio signals and the many ghosts of their brother. It's a story of healing and growth. And whatever the opposite of cloying is.

Not much happens. And everything happens.

And the character design—these people are a family. And, by the end, for all their failings, you'll wish them well.


127) Everything but Money by Sam Levenson, finished on December 16

The book is a mix of small comedic pieces published in places like TV Guide, Parents, Collier's, and newspaper syndication; and some preachy bits that appeared in the same places. How much where versus how much otherwhere versus original to this book, who can say. The book as a whole holds together. Let's talk about it!

The first thing you'll notice is that over half the book is part one. It goes on long enough, it's a shock when it ends.

"Sweet Horseradish" is about growing up poor, the children of European, Jewish immigrants. It's packed full of wonderful stories about a disappeared world. Games in the streets, dealing with relatives, living in packed spaces, what school was like, what holidays were like—it's a mix of absolutely real moments and delightfully comedic hyperbole. I imagine this must be what Levenson's comedy schtick was like. (I can't say for sure—I've only seen him guest on What's My Line.)

Then his childhood ended and I was shocked to realize the book continued onward! I'd been reading it, like, twenty months at that point!

Anyway, he grows up and goes to college and moves to the suburbs. Works fifteen years as a high-school Spanish teacher. Later moves into entertainment, though that's less grounded and so gets less play.

Part II starts off a bit preachy about How Things Have Changed, but happily digresses into more comedy bits now and then. "Off My Chest" more directly deals with patching up society, but it also loses its way now and then with bits that feel like they've already been workshopped on stage. Certainly, they seem to require an oral delivery. Or maybe it's just that fifty years have passed.

That final tiny section is just his last plea for goodness.

Some of the things he worries about can seem snobbish (kids need classical music, not British rock bands) or quaint (maybe schools could provide lists of educational tv progams?), but he seems like a genuinely decent human being. Although some of his phrasing is, ah, rather midcentury, I don't think it would be absurd to call this book the antiracist bestseller of 1966.

(I used a part near the beginning of III to suggest a reimagined classroom with my sophomores. They weren't as enthused as me.)

He's a charming host and he has the sugar to help the medicine go down. Plus, it's just a terrific bit of time travel.

Click this image to read the book at the Internet Archive: 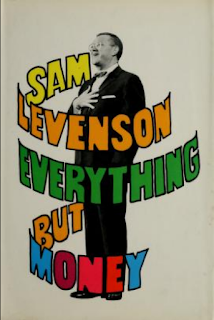 a shade over two years


128) Chip Off Olympus by Jules Tasca, finished on December 17

You know that brand of liberalism that proves how not racist/sexist/etcist it is by making racist/sexist/etcist jokes and daring you not to laugh? From All in the Family (from which this play takes its epigraph) to South Park, this aliberal liberality has broken open conversations and made a new generation think racial epitaphs are okay to laugh at. Sort of a mixed victory, you ask me.

Chip Off Olympus dives right into this. I'm honestly not sure from fifty years later how likable these characters are supposed to be. What remains real is the seeming betterthanness they have over other races, poorer people, religious people, fans of lowbrow television, and so on.

I can imagine laughing at about half the jokes, but the other half would leave me feeling so dirty, I wouldn't have a good time.

Here's the set-up: Three grown kids (one a famous heart surgeon, one a failed writer, one with stigmata) and their mother cope with the legacy left by their bit-player father, an absolute saint, who, it ends up, "dorked" absolutely every leading lady he ever worked with. Which was pretty much all of them.

I mean, it could work. The set with all the props from all those movies is visually fun. The kids have a decent dynamic. Mostly, the jokes, in their attempt to be cutting edge and modern, have aged very very poorly.

Ah, comedy, thou dangerous lover thou.

a week or two


129) Imagine Wanting Only This by Kristen Radtke, finished on December 21ish

Less a meditation on loneliness and more an address to mortality, this nonfiction look at dying relationships, people, and places is a tighter construction than her second book.

Radtke's style—realistic but simple, monochome with washes and stark lines—backs up the themes of her book. It's a terrific fusion of form and function.

And someday, no one will remember it.

Thurber drew compulsively which is why he can do so many things. Sure, sure—it all looks the same, and he was, as is mentioned int his wife's intro, "pre-intentionalist . . . finished before the ideas for them had occurred to me," but he's playing with variations on his themes and each is unique and does something new. I admire that. And it let's me know my compulsions aren't so powerful and don't push me as far.

131) The Spirit of the Season edited by Curtis Taylor, finished on December 29

After getting to tell Curtis Taylor how much The Invisible Saint meant to me at a virtual Sunstone thing summer of 2020, he invited me to submit to this collection. Which was flattering—and great to add another holiday story to my collection.

I had my wires crossed on some of the details, as it ends up. Mine is perhaps the shortest story in the book and it might be the only one without Mormon content. But hey! I got to write a Christmas story in a genre I'd long wanted to. (I won't say more because I don't want to ruin it for you. Pick up a copy to prep for next Christmas).

I saved my story to read last and Orson Scott Card's to read second-to, since I'd read it before. My memory of that read (although the two sentences at the link aren't enough to be certain of my opinion) is that it's well below my expectations for a Card story. Some of his short fiction is among the best I've read, after all. But I did find the story emotionally moving, even if I do find somewhat unpleasant the the story's theme, viz. Redemption of the Wealthy Capitalist Who Was Actually a Really Good Person All Along.

One funny thing about that story is it still takes place circa 1991, but for this publication, Card (or Taylor?) updated "home teaching" to "ministering"; add this to your collection of mildly amusing anachronisms.

My two favorite stories are probably the first I read (Taylor's "Mavericks" which takes place near my wife's hometown and features one of the best renditions of powerful spiritual influence I've ever read) and the third-to-last, Ann Dee Ellis's "A Christmas Story" which is tight and beautiful and sad and witty and manages to be full of style without ever once seeming like it's showing off. I don't think I'd heard of Ann Dee Ellis before, thought she has multiple books out. I've mostly sworn off YA and MG books, but maybe I'll make an exception. Anyway, I've put the two at my library on hold.

A few thoughts on some of the other work:

Darlene Young is represented, including her dirty shepherds poem, which I love.

Several of the stories I thought were very close to being excellent and just needed a sterner final edit. I feel pretty safe saying that not just because a couple of my favorites should have been a couple pages shorter but because the brown M&M's were still in the bowl: when a word started with an apostrophe, it curled the wrong way. I believe every time. I noticed.

Anyway, stories I thought were great but should have been a hair tighter include Donald Smurthwaite's "The Greatest White-Flocked Aluminum Artificial Christmas Tree That No One for Miles Around Ever Came to See" (which felt even more true when I visited my parents and saw their spinning tree) and Stan Zenk's "The Wenceslas Papers" (a comedic noir).

That latter story took place in San Francisco, which merits mentioning that most of the stories are set either in Utah or Northern California. There are a few exceptions: Southern Idaho which might as well be Utah (the reason people from southern Idaho resent people saying this is because it's true) and England (though with a strong Utah tie). Makes me feel even more out of places for setting mine in the Midwest. Vive la différence!

Some of my other favorites include those from the big names, the people who make the cover: Dean Hughes (his story, along with Card's originally appeared in Aspen Books' Christmas collection of three decades ago) and Susan Easton Black (whose essay appeared in a Deseret Book collection two and a half decades ago).

In short, even though I feel justified complaining about the polish of about half the collection, I still enjoyed it mightily. And I know that anyone even a hair less persnickety than me is apt to have no complaints at all. Make it a gift for the better-than-Theric person in your family.

books from this year