037) Bride of the Far Side by Gary Larson, finished March 23

Comics collections are all over the house—Calvin and Hobbes, Peanuts, Foxtrot, Sherman's Lagoon, Garfield—and so I'm always reading them. But not in a front-to-back way and so I never really "finish" one. Today I did! Funny stuff. As is to be expected. 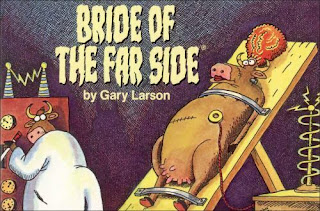 waiting out an adolescent temper tantrum


038) Batman: Night of the Owls by the entire DC bullpen, finished March 23

The first book was really just set up for this ambitious one-night story spread across multiple titles and, in some cases, multiple issues of those titles. A whole bunch of writers and artists working together, trying to do their own interesting thing with the characters available to them. DC went big on this one! But it was truly an issue of too many cooks.

This comes out as DC was still working out its New 52 and the efforts to bring a new world to life and do exciting new things is sometimes in conflict with correlating all those things into one great whole. As a work of Batman theology, it's trying hard but it's not likely to keep kids in the faith.

I appreciate the effort. But I didn't really care for it.

This book is as old as I am and has been a classic just as long. Yet I never read it. Or really remember being aware of it before subbing in elementary classrooms about fifteen years ago, where I would see it on shelf after shelf in room after room.

I picked up a free copy late last year and gave it to Son #3 as a Christmas present. I was right and he did like it. He passed it onto me and I finally picked it up.

I anticipated liking it but I did not anticipate loving it from the first page. Raskin can right! I also expected a charming little mystery—and I did get that! What I did not expect is that, following the mystery's conclusion, would come an extended epilogue to push the novel into emotionally-moving territory. Nice play!

My library has Raskin's other novels as well and I may well pick them up. They certainly have great titles. 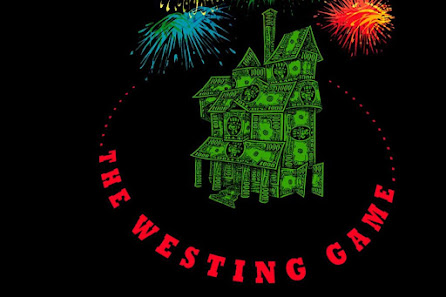 040) The Pocket Book of Ogden Nash, finished March 25I started reading this book while my students were taking state tests. With poetry, you're always near a stopping point. And with Ogden Nash, the only worry is my laughs will be disruptive.

I highly recommend reading Nash because he is brilliant and hilarious but because comedy doesn't age well and with each decade, fewer of his jokes land. Act now!

As I read, I wanted to write about many of the poems individually. So many lines and verses that were too good not to share. But circumstances prevented and all I can do now is press this (or any of his) book(s) into your hand and say, read! read!

You'll be happier than you were.

I don't really dig GRAPHIC NOVEL ADAPTATIONS, as a rule. I don't think there's anything wrong with it anymore than I think film adaptations are wrong. Adapt away! But most (not all) comics adaptations of novels I've read (or started reading) are lifeless and being "good for you" was the main goal. It started with the passion of a suit imaging selling it to schools and grandparents, not the passion of artists who love the story.

I am happy to this one is great!

Does it eclipse the book? No. (Lucky book!) 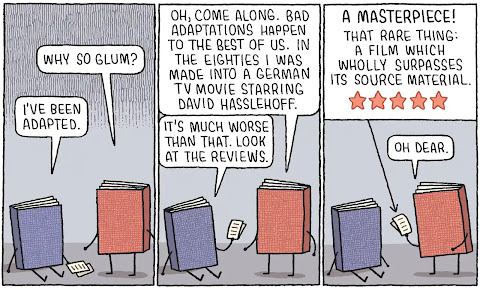 But it's pretty dang good.

The first smart move Ryan North made was taking one step back from Vonnegut's first-person narration. And while he doesn't enter the text as, say, Ryan North, he does create an over-narrator that can talk about dead Kurt Vonnegut.

The text follows the basic shape of the novel and hits the main point fairly accurately. Bits are missing and some parts don't quite match the rhythm, but other decisions are frankly brilliant. This is a definite comics version of Slaughterhouse-Five.

The only real downside, I would say, is that the comic seems forced into taking more clear sides as to whether Billy is actually timetravelling or just crazy, but I feel it did the best it could. 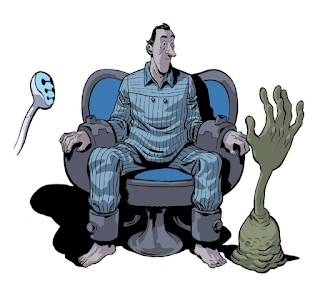 
042) The Fox and the Star by Coralie Bickford-Smith, finished March 28

The woodcut-like illustrations are beautiful and the tone is perfectly folktale-like, but the story lacks the logic of folktales. It didn't make any mythic sense to me at all.

But oh, the pictures were lovely to look at. 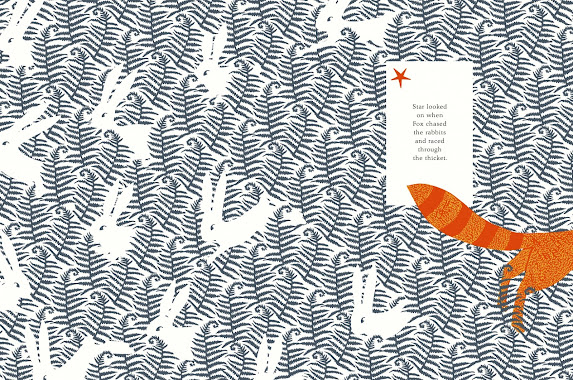 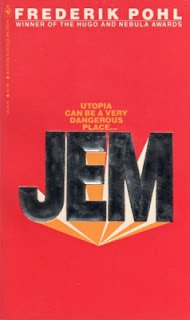 I love how simple this cover is. (The back is even plainer—just read with the words "THIS IS THE WAY / THE WORLD ENDS..." in text matching the UTOPIA text on the front.) That's why I picked it up and why I had a hard time getting rid of it, even when I doubted I would ever read it. But read it I have! And it...is not the book it was in 1979 when it became the first (and last) novel to win a National Book Award in the science-fiction category.

Clearly, in its era, it captured something that felt enormous and true. And all I can say is: 1979 suuuucked.

Pohl has a low opinion of humanity. Even in the final chapter which behaves like something hopeful and utopian, it's questionable. And the rest of the novel is filled with backstabbing and inevitable nuclear weapons and rampant nationalism and violence and betrayal of all sorts.

This future wants to be post-racism and post-sexism but the characters are still hella racist and sexist, they just are open about it. It's that sort of calling-a-spade-a-spade version of not being racist. It's not racist is we openly acknowledge it as such. The constant sex is similar. The characters are sexually free because they recognize that they are doing things they shouldn't do but it doesn't occur to them they shouldn't even though they know....

It's tricky, not being of your time. Pohl's made an effort and good for him, but he's wrong in ways that have aged this book abysmally. Really makes you think, as a writer, about trying to make future-living people. They'll probably end up time travelers from your era only.

Anyway, I didn't like the book. But I kept reading it because the science-fiction concepts are compelling. The Jem of the title is a planet orbiting a dim star. Our humans go there and discover three sentient species happily eating one another. Naturally, colonization happens and, naturally, it gets ugly. Some of the colonizers happily exploit and others accidentally exploit, but they're all exploitin' regardless.

My favorite character is Charlie, a sentient hydrogen balloon. And his naive corruption through his connection to the humans is tragic to watch.

Intentionally or not, everything is upsetting in this book, so if that's your genre of jazz, this Jem's for you.


044) The Mundane Adventures of Dishman by John MacLeod, finished March 31

I'm not sure how I ended up backing a collection of a Canadian b&w I'd never heard of before, but I have absolutely no regrets. I laughed all the way through, the art was high quality than I anticipated, and the writing was simple but honest. I believed in this story, in all its absurdity. In same ways, I might even like Dishman more than Flaming Carrot. 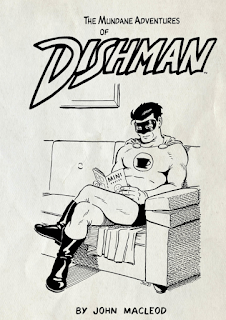 In short, after living for years with radioactive Fiestaware, mild mannered Paul develops amazing dishwashing powers, which he then decides he should use to fight crime.

So you can see how irresistible Dishman is.

I only wish there were more.


045) Because Sometimes You Just Gotta Draw a Cover with Your Left Hand by Stephan Pastis, finished April 4

Remember up top where I said I never finish reading these sorts of collections? Well, my beloved just brought a stack of them home from the recycling center and while it was mostly Foxtrot, a couple Pearls Before Swine and a Get Fuzzy. The latter two I started reading the moment they appeared. And have been somewhat loyal ever since, although following a syndicated comic is a big commitment. So not that loyal. 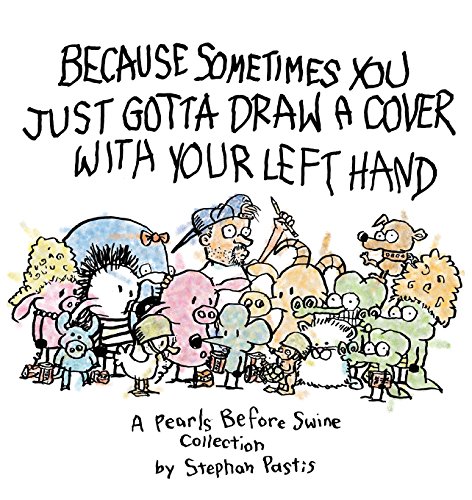 I grabbed the standout cover (not standout because it was good but because it was bad as Pastis admits in the intro; but it's even worse because trying to search Amazon for left hand pastis just got me pasties; even putting in the entire title did not help; BAD TITLE more than bad cover, honestly) and read it.

The strips ran from May 2010 to February 2011 which finally answers my question of how many strips does a book like this hold? They almost always remove the dates from the strips (at least from more modern strips) which I guess is to make them timeless, but whatever.

It's a funny book. A bit misanthropic, but I'll allow it.