This novel is an excellent example of what Pratchett does well: understand people; incorporate mythology; treat characters with dignity and care (even if the reader might rather see them slapped); defamiliarize then reimagine and redefine basic words and concepts and tropes.

I can see why he was so happy with the Tiffany Aching novels.

The 5yrold, upon reaching the final page, immediately asked if we could get the next one. I was happy to tell her I had already placed it on hold.

If you want a summary, here: Tiffany apprentices with an ancient witch where she accidentally steps into the world of gods and goddesses, interrupting the natural flow of seasons as winter, now in love with her, incorporates and makes his coldness permanent.

It's an intense thing for a girl to combat. But she has wise women and friends and the gift of good sense. And you don't even realize Chekhov has shown you his gun until the moment after it has been fired.

A colleague handed me his copy of this Wells novel I had not so much as heard of before and insisted I read it. And so I have.

Anyway, it was fun to hang out with him again! From the title and cover and I figured this would be something less high concept but boy oh boy was I wrong. This 1937 novel does nothing less than explain current atrocities and predict more to come. So tada, Mr Wells. 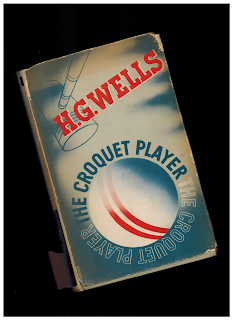 In short, humanity has lost its Frame of the Present and we now are aware of the endless past and the endless future and this is driving us mad. This is all accomplished by means of a Bertie Wooster-like character who meets a couple early adopters of madness and, lacking a Jeeves, thus begins slipping into madness himself.

I can't tell if this fellow's reaction to the madness he has been exposed to is intended sardonically or satirically or sarcastically someotherly, but it's clear Wells expected his contemporaneous audience to receive a certain lesson. It's not easy for me, 85 years later, to clearly identify that lesson, but the questions are still piercing and valid.

The book is short enough that its two-blokes-talking set-up shouldn't prevent kids from engaging with its ideas, if you're into forcing that sort of thing.


027) Lost States: True Stories of Texlahoma, Transylvania, and Other States That Never Made It by Michael J. Trinklein, finished March 12

I love reading about states that never became states. Many is the Wikipedia rabbithole I've fallen down, reading about East Dakota or Jefferson. I'll get you started, but BE CAREFUL. Just finding that link has led me to open a score of tabs I did not intend to open.

Anyway, Trinklein here has book together short summaries of a bunch of fun states that never came to be, along with maps (mostly of his own creation) and some faux ephemera like stamps and postcards and license plates from those coudabin states.

So I loved this book. And I will think about these borders and alternate realities for a long time. Your own mileage may vary.

a week or two


028) Nightwing: Leaping into the Light by Bruno Redondo and Tom Taylor, finished March 13

I loved this. I mean—I think Nightwing is one of the top couple DC characters ready to break into the mainstream (by which I mean: lead character in a blockbuster movie) and this book is a strong choice for the story to make that happen.

(I think it would be better if the first movie began with Nightwing and Batman estranged, but this would be an excellent concluding story. Just leave out the heart-taker guy. If you leave him in, you'll have to do two or three more movies.)

Dick comes into some money in this collection and into a blood relation and into some serious family history. Plus, he has all the strong relationships he's built over the years and the respect from them he has earned. As he navigates what to do about his sudden windfall, he speaks with Superman (and some other important but less famous characters); afterwards, he speaks with Batman. The respect these two men hold for Dick is genuinely moving. Between that and Dick's ambitious and righteous plans for the money, I found myself teary-eyed. Dick Grayson is one of the best human beings in the DCU—and we got to see him grow up.

It's kind of awesome.

Kind of the best thing this sort of endless serial storytelling can give us.

Plus, I like the thing that often shows up in Nightwing comics of a sequence of moments appearing in a single panel. How did this become one of his trademarks? 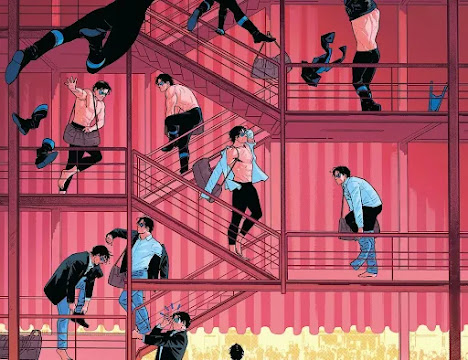 
029) Batman: The Court of Owls by Scott Snyder and Greg Capullo and Jonathan Glapion, finished date

I can see why this gets lauds as one of the great Batman stories. It's certainly playing with the mythos in interesting ways. But it's not really enough to pass judgment. Back to the library for #2, I suppose.

I read an excerpt from this as part of the most recent (last) BAC I read. I don't remember what I thought and I've never cared for Zippy but here I am reading the book. I . . . can't remember how I happened to check it out. So much mystery!

But I'm happy to say Griffith can tell a longer story. Some of his choices only sort of make sense (his floating mother heads I get but the coming and going of her disconcerting wink I do not understand). This is one of the best memoirs I've read about family history and deciphering the past and the connections between generations. In part because it's just as much about the holes that will never be filled as it is about the discoveries made.

It has an ambiguous, Stuart Little-like ending,* but since it cannot conclude, why not? 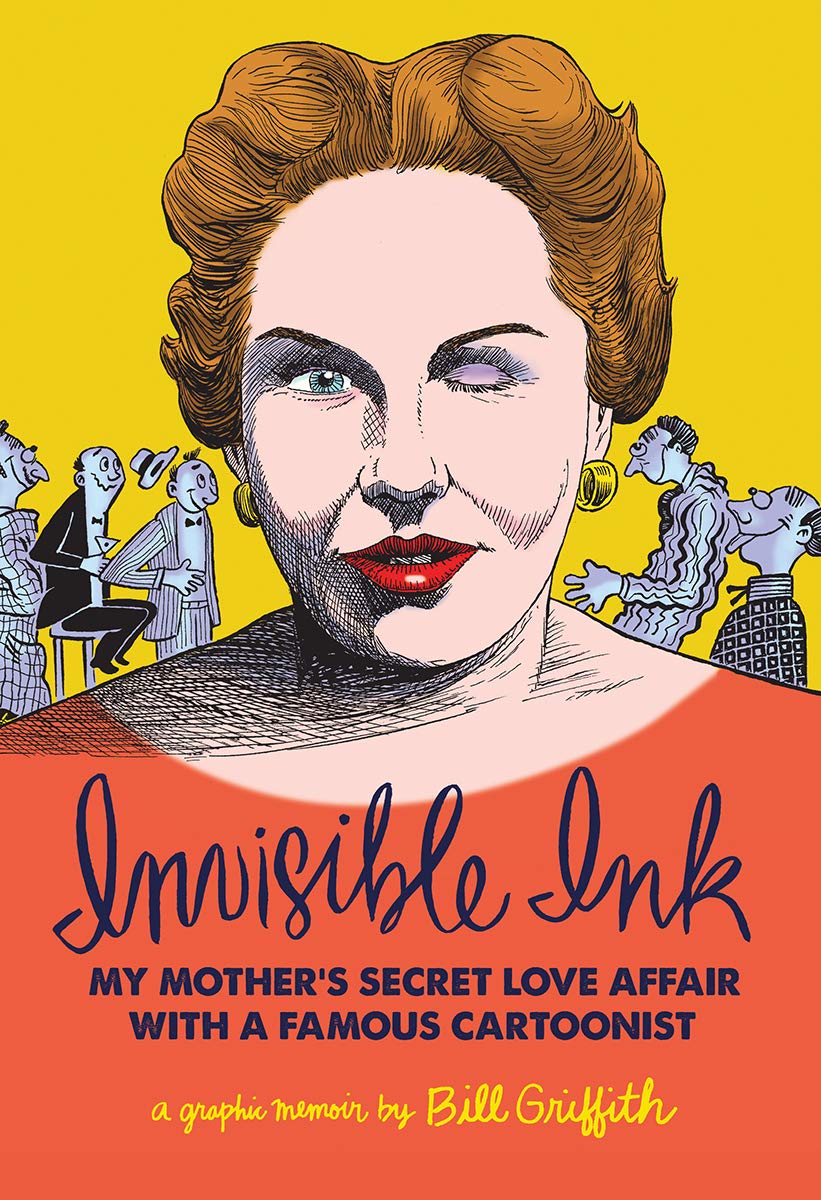 I'm so glad I'm not a Freudian, however, as then I would have to spill ten thousand words on this man's pursuit of his mother's mystery. Phew!

a few days at most

I happened to see a couple pages of this on Twitter the other day and could not believe what I was seeing. So on an impulse I checked and the library had it. So I checked it out.

All believing it would be terrible.

Even the laudatory comments on the back cover calling it the best comic of the year and most important art of 2016 just perplexed me, did not convince me.

So I read it and it's genuinely funny and takes deadly aim on some serious topics and doesn't let it's satirical aim spare anyone or anything and was even actually moving at one point.

The link attached to the above image talks a great deal about how this The Flintstones is sad. And that is true as well. But it is smart and funny, too. And cruel. It's a lot of things.

If it's possible to believe it's worth your time, you might as well.

one imagine the same


034) The Jetsons by Palmiotti/Brito/Sinclair, finished March 16

Lots of great science-fiction ideas crammed into a story with flat characters, bad dialogue, and lifeless facial expressions. Add to that an artist who is trying really hard not to sexualize (does not seem to come naturally) and an uncertain relationship with the source material and all one can really say is: it's no Flintstones.

Which is a really weird thing to hear oneself say.

(I did actually say this and it broke my wife's brain.)

one imagines the same yet again

So this Mark Russell is some kind of writer.

Now, I don't know these Hanna-Barbera characters as well as the Flintstones or the Jetsons, so that fact that I could only occasionally hear their voices in my head or recognize their characters may be on me as much as on the comic, but also the comic has permission to reinvent and reimagine as well as to reflect.

For the first half of the collection, I didn't feel it had a clear sense of how to balance its old IP with it thoughtful and adult content, but by the end I was completely sold.

In short, Snagglepuss is a gay playwright, arguably the most celebrated American playwright working. He's also targeted by HUAC. From those two facts alone, you can imagine the heavy themes that might appear. I mean—a classic cartoon character commits suicide. This is not light reading. Even though many of the characters are crayon-colored.

Unusually for me, I appreciated the historical notes at the end. I learned from this book that Marilyn Monroe was Castroville's first Artichoke Queen and so it was good to learn I couldn't quite trust all the fun facts. The timing of Marilyn's time with Arthur Miller was different, for instance.

But yes: this is a work of historical fiction, and its weaving of classic cartoon characters with the heaviest moments of midcentury history worked surprisingly well. I did come to genuinely care about these characters.

And that's kind of amazing, isn't it?

I LOVED THIS BOOK. From the beginning I was drawn in by its characters—both the writing and the refined drawing. Refined, but postmodern in the sense of bits of the penciling process still visible behind the inks and watercolors.

A young reporter shows up to interview a curmudgeonly old reporter. Which is as fine a setup to story as any, but the story as laid out provides layers and and motifs that set up enormous emotional payouts in the final act.

This is the best work of fiction I've read this year and the best comic. It's off to a strong start for book of the year. I could write about it at length, but I don't want to steal anything about the experience from you should you choose to have it.

I suppose I should give you a content warning (sad debauchery) but even so, I do hope you will read this book. It has been my wonderful companion these past evenings and would, I am certain, do the same for you. I want to move into this book and just sit with its principals, sipping hibiscus tea. (It's good for the kidneys.)