019) Zatanna and the House of Secrets by Matthew Cody and Yoshi Yoshitani, finished Febraury 17
Given I don't know much about Zatanna (and how is anyone supposed to recognize her at age thirteen, sans enormous breasts?) I can't really say how this compares. Largely, her whole thing seems kind of dumb, though I imagine someone's made it work.

This too was a little dumb but in a fun MG way. And it was fun to read with the 5yrold because it shared elements from the first two Tiffany books, so she could onestory along with the plot twists.

two sits in one evening


020) Fuzz by Mary Roach, finished February 19
I love Mary Roach. She is clearly an excellent human being and her books are delights that open up a new corner of our shared world. You cannot read a Mary Roach book without spending all your time putting it down so you can grab people and force them to share your delight in a new fact you've just read.

After reading Fuzz, you will have facts about cougars and bears and monkeys and camels and deer and leopards and keas and many others as well and their relationships to people and cars and buildings and corn and each other.

Anyway. Don't miss it. Then start filling in the gaps. (Me, I've only read five of seven plus many of her shorter works which I look forward to someday being collected.)

My last Ito read was a stunning tour de force by a master of his craft. This one is a collection of short stories starting early in his career and revealing his growth both as a draftsman and as a storyteller. On average, the stories get better as they move forward in time.

That said, it seems to me that his native land is the booklength story and not shorter pieces. While this was largely entertaining, it is the least of his I have read.


022) You May Already Be a Winner by Ann Dee Ellis, finished March 4 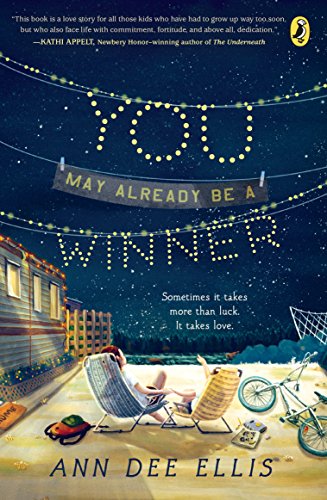 I wish I could remember why, a few weeks ago, I went to my library website and looked up Ann Dee Ellis and checked out all they had by her (surprisingly, only two books). But I don't remember. I believe I read something short by her and was impressed and wanted more but I do not recall what that thing was. Which is a tad frustrating.

I kind of wanted to read the other of the two books first (I like its cover better), but the flaps made that one sound like a downer and I felt more like something cheerful so You May Already Be a Winner it is!

I mean—it lifts up at the end. Although the final chapter is more of an epilogue demanded to tie up at least one of the two ongoing this-will-happens; the emotional climax came in the chapters before. But hey, endings are hard. I hate most of mine, too.

Anyway, this is the story of a 12yrold girl whose family has collapsed and she is forced into adult roles utterly unreasonable for her to take up. But she takes such good care of her little sister.

The book provides a potent look into the heart of a kid negotiating trauma and the inability of adults to recognize the weight of these things. In part because they can be so overwhelmed with their own perspective.

Anyway, it's joyous but it is also rough. And if we as a culture could get over the stigma of government assistance, that would be great, mkay?

I'll admit I skipped chunks of this book. The writing is clunky. I blame the editorial staff more than the cowriter, but it's just sloppy stuff. Which is a shame, because it's an interesting topic with excellent anecdotes, but it's not fun to read on the sentence or the paragraph level.

Anyway, Goetz is Hollywood's #1 film tester, taking cuts to sample audiences and getting feedback to make the next cut play all the better. That's interesting! And he has good stories! And still I skipped and skimmed plenty because it's just not a well written book.

And that's why snobs have no fun.

These ruminations on writing (both the act and the result) and lovely and provocative and led to much underlining. It's a slight book and wondrous and so you might as well.

Because I read it over such a long period of time much of it is fuzzy now, but I read the final two essays today (both on other artists: one a painter, one a flyer). The latter, allegedly, is the only one in the book Dillard still stands behind (?). I don't know what, but it was a thing of beauty about an artist working an artform I'd never really thought about before: "Nothing on earth is more gladdening than knowing we must roll up our sleeves and move back the boundaries of the humanly possible once more."