How about four comics to end the year? Something forgettable, a new old favorite, a serious note from an old friend, and something pleasant yet nutritious.

And then we're done for 2022. I consider it unlikely I will finish any other books in the next 10 hours and 55 minutes. I could, if I really wanted to, but I don't think that's my plan. So happy new year, fellow readers!

(And brace yourself the year's-end deluge—yesterday was state of the newsletter, today is final books of the year, today or tomorrow is final movies of the year—but I think I won't be returning to a year's-end best-comic-read post; in part because I can't decide between this one and this one.)

Last week-of-school prank at a high school for magical creatures, and a curse, and everything resolved, and no one hurt, like an old sitcom, with commas filling the roles of true beats.

lying in bed one morning 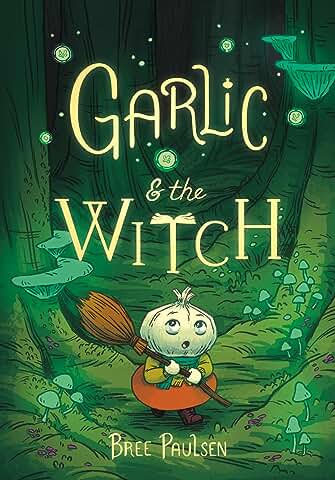 I love how gentle these books are. They do all the things good-for-you books are supposed to do but without forcing anything down your throat or drawing big ugly arrows at the morals.

This was even pleasant to read out loud which is not always true of comics.

Big changes happen in this one! What looks like a metaphor for adulthood becomes literal adulthood. I'm not sure there can be a third book aimed at this audience, but I'm open to finding out!

Kate Beaton's been working on this for years and while it is good, it also feels like something she had to do before she could get on to what's waiting for her.

In short, before during and after starting Hark! a Vagrant, she was working the Alberta oil sands. Desperate for money and stuck putting up with all the crap you can imagine, she spends two years bluecollaring in nowhere. 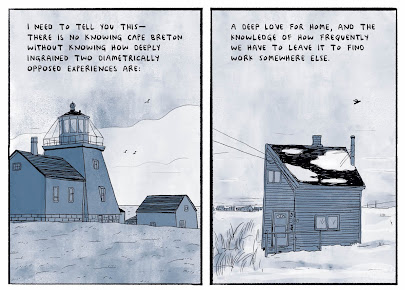 A lot of us come from places you can't stay in. And while the pull home is weaker with each passing year, it never leaves.

A friend of mine recommended Hendrix's picture books about Jesus (1 and 2) which I now also recommend to you. They are excellent. The art is wonderful, their relationship with scripture is intelligent, and although they're a bit wordier than I like my picture books, they are a pleasure to read.

In the author's note Hendrix says

I do not understand faith without doubt. The laments and questions in these comics are my own.... they are expressions of a mind wrestling with the alternating seasons of faith and doubt that are familiar to any person of faith, no matter the belief system....

In the end, the effect is one of peace and hope and charm.

The intro is by Patrick McDonnell, and Hendrix's style in Holy Ghost reflects his more than anyone else's (although it's Watterson and Schulz he shouts out as inspirations). 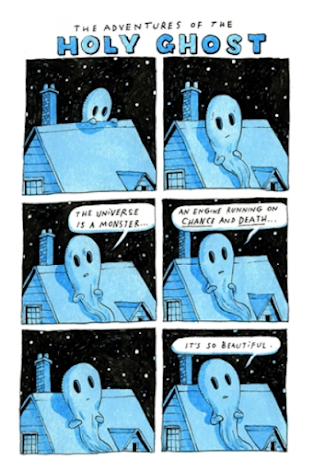 What else was read this year:


Not the end of the year yet


___related___
UNFINISHED BOOKS
REJECTED BOOKS
get these things in your email
in a slightly different form
Thritten by Th. at 1:30 PM