Lot of comics this go-round which surprised me as I've been reading a lot of prose of late. But I'm in the middle of lots of books, not at the end. Other than rushing through Emily St. John Mandel's latest, my personal reading's been at a more deliberate pace with comics thrown in for spice. And three of the eight I read with other people. Here's to reading as a communal activity!

We spent sooo much money getting me this entire set to it's high time I start reading them again. I decided, however, that I would not start at the beginning or feel I had to go in order and certainly not like I had to read the introductions. Just enjoy the art.

Sally begins kindergarten in this volume. Much of the dialogue from the Halloween special comes from these strips. Schroeder forgot Beethoven's birthday in 1961 but made up for it in a big way for 1962.

I received notice from Kickstarter that volume two is now for sale so I figured I better read volume one (which I have no memory of supporting but arrived in the mail one day anyway) to see if I want another.

The writing is terrifically funny, even the fake letters page and the how-I-do-comics pages (which are also more informative than usual)—and most people who try to be funny there are, ah, a bit embarrassing.

So this retelling of the Theseus myth complete with gods and monsters is entirely entertaining and all I want is more. So I guess I'll get more. Even though I sorta kinda swore off buying more comics on Kickstarter. 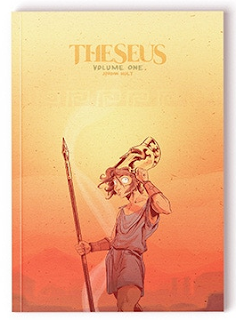 
112) Over the Garden Wall by Pat McHale and Jim Campbell, finished October 20

Following Over the Garden Wall's (deserved) success, comics started appearing. This volume collects the first set of stories, which occur between the episodes of the (excellent) show. And they do a fabulous job capturing the show's vibe and its pleasures. Which seems like review enough.

"I've never been interested in auto-fiction," Olive said, but it was difficult to meet his eyes now.

That's the most interesting sentence in Sea of Tranquility. Because Emily St. John Mandel is clearly messing with us. Olive is a character who found sudden success writing a novel about an impossibly volatile flu and then, a few years later, finds herself living in a world where a real pandemic arrives. On other words, Olive Llewellyn and Emily St. John Mandel are too similar for anyone to doubt the possibility that Olive is just a fictionalized Emily. And so when Olive says she has no interest in auto-fiction, one imagines Emily too must look away.

"What are you working on these days? Are you able to work?"

Sea of Tranquility takes place in a number of years from 1912 to 2401. It includes some deliberately paradoxical timeloopery and is intentionally a sequel to The Glass Hotel, although not the one I read. When Jonathan starts imagining another world rather than the prison life he is living, it is that imagined world that is the real world in Sea. Not to mention the characters more or less prove they are living in a simulation. So "crazy sci-fi" seems reasonable. But so would "metafictional" or "auto-fictional."

This is a pure example of the pandemic novel. It can only exist because its author had little else to do. And it's a successful experiment. I don't think it's quite as good as her last two novels, but it is good and it's, well, it's crazy. It may prove to be a transitional work for her. What we see next may be something entirely new.

Which is pretty exciting.

And maybe worth screwing up the timelines.

I first (and most recently) read this to Baby O when he was a literal baby. He is now a freshman in college. I first remember hearing about the story when Siskel and Ebert loved a film adaptation, which I then rented on VHS as a teenager on their recommendation. (Or, possibly, just remembered their recommendation clearly enough that I eventually watched it much later. Who knows.)

Anyway, the story is emotionally compelling and moving and filled with details the 5yrold liked as we spread it over a couple months of bedtimes.

That said, it is also racist and classist even as it strives desperately not to be. It's sort of racism and classism that's nearly impossible for someone like my daughter to pick up on, but pausing for pleasant conversation to explore the, ah, sticky issues raised was not wasted time.

She's very excited to read it again. I'm not sure I feel the same way, but after her library book, I don't have something else in mind, so we'll see if she still wants to read it then.

Part of one story in this collection was drawn by Noah Van Sciver, which is how it came up in my library search. It's a short, for-kids book so I decided to just start at the beginning and read through. And I'm glad I did even though it was largely dumb because of a story written and drawn by Ben Costa starring a mutant frog who is nothing more than an extended riff on Napoleon Dynamite. Not excellent, not important, but 100% delightful. You have to see his photo of his girlfriend.

What a weird play.

Because wearing horns isn't really part of our culture anymore most of the jokes will be left out and those left over will slide by unnoticed but this play is intensely cynical about love. Intensely. Maybe it would have been best if that turn to tragedy had just gone all the way to piles of dead bodies.

I read the first of these (Tiger), a soundless journey through natural India, alighting on animal after animal and ending with a startling human appearance. I liked it enough but it wasn't a hundred pages and I didn't have that much to say so screw it. It doesn't count.

But I did like it enough to read another. And after that one, I did have something to say. So I kept reading them and now I've read all five (at least, all five so far) and I kinda love them. Certainly like them much more than the other book I've read by these two.

I love how they are shockingly brutal at times. I love how they show many different parts of ecosystems. I love that small animals and large, both predators and prey, get to be protagonists for moments.

Dinosaur is rather different from the others in that the cover animal seems like the second protagonist, not the first. But I discovered that the original title is plural—Les Dinosaures—which makes more sense.

I like how both land and water are engaged in each volume. I like how big their worlds are. Fox takes place in an ice age and there's a volcano and orcas hunting bears and man oh man it is awesome.

I mentioned the shocking appearance of man at the beginning of Tiger. Man, appropriately, also appears in Mastiff and, again, in a shocking manner.

My five-year-old really likes these because they have no words. But she also finds them pretty dang scary. I'm not certain she's read every panel.

Because they are genuinely thrilling. Life and death. Survival of the fittest, at times, survival of the luckiest at other times. Lots of owls. At least four different continents. Wondrously detailed and felt. Just terrific books, especially when added together into one great whole.


get these things in your email
in a slightly different form