035) Mendoza in Hollywood by Kage Baker, finished May Day

This is the third novel of The Company by Kage Baker but the first I have read. I first became aware of Kage Baker's The Company in 2002 when I was subscribing to Asimov's. Part of the reason I let that subscription lapse was because most of its content was lousy. But Baker's Company stories were terrific and I loved them. I put In the Garden of Iden (the first of the novels) on my Amazon Wish List and then never got around to actually buying it.

Last year a parent donated the second and third books in the series, but not the first, so I was paralyzed. This year I decided so what if I don't start at the beginning? and picked up the third volume, this one, which had the more interesting title. And I began to read. And, generally, to be disappointed.

Now it's been almost a decade since I read the short stories and it may just be that my tastes have changed in that time. But I think what we have here is a concept that works best in small doses.

Dr. Zeus and The Company have invented immortality and time travel. Problems: time travel: only can go backwards from your present, not into the future; immortality: it's not really all that great and people don't really want it (although why this is, I cannot understand). So The Company, whose goal is "to make money and improve the lot of humankind", finds orphaned kids in the past, makes them immortal, and puts them to work. So Mendoza, for instance, was made immortal four, five hundred years ago in Spain and has been working as a botanist ever since, saving rare endemic plants so they can, in the future, be used to cure cancer (or whatever).

Speaking as a fellow writer, the concept is brilliant. You can dig into brilliant characters while placing them at any point in time and space. You want Mendoza in Civil War-era L.A.? Done. Wherever you want her. It's a great trick. Kudos to Baker for coming up with it.

So how can this concept not work at novel-length? Good question. It's quite the mystery.

One problem is that Baker loves her research too much. It was fun to read about the immortals watching a salvaged copy of the full nine-hour Greed, but an even long blow-by-blow of Intolerance was too much (although now I want to see it). And this is a science fiction novel about cyborgs so it's hard to parse the fiction from the nonfiction, eg, all the stuff about Catalina Island. Which, as a reader, I find frustrating.

All that said, although I have no intention to read more Company books (too many books in the world to read them all), I would not rule out one of the short-story collections. And I am a little sad not to learn the solution to a few of the mysteries posed in this novel. But so it goes, so it goes.

This ended very nicely. I still don't see myself reading lots of Superman in the future, but All Star was very much worth my time.

Also worth noting, the intros, instead of being blind effusion, as is normal in these collections, actually made thoughtful remarks that helped me read more intelligently and with a deeper sense of what Grant hath wrought. So don't skip them. 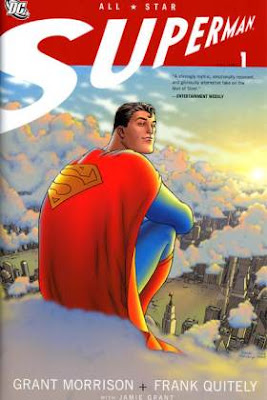 So I tend to find Superman rather boring. And I've seen All Star around, but the art looked . . . meh. But then I got a reprint of the first issue at Free Comic Book Day last year and I was plenty impressed.

Then Ben lent me this and I like it much.

For instance: no way you would think this Clark Kent might be Superman. Good.

If you must read Superman, try this.

Due to a recently developed personality disorder I can't be ecstatic about it, but it is indeed very good.

Skinny: A series of connected short stories about the Palmer family stretching over a hundred years (but mostly within the last thirty) told from several point of views, male and female, young and old.

I've been hearing a lot about How Feminist! this book is, but I'm not sure what people mean by this. It can't be in the pejorative sense because I don't feel like the men are demonstrably more "mortal" than the women. So I guess I need someone to explain that to me.

I've never liked Ra's al Ghul. And I didn't like my first look at Morrison doing these characters this time 'round. But I must say I was pleasantly surprised. Damian's still a little prick, but this was an enjoyable book.

I knew I liked Grant Morrison.

by Evelyn Candland, finished March 7
016) Frankenstein; or, The Modern Prometheus

by Keith Giffen and Cully Hammer, finished February 18
011) The Joker