What we got here is a Mormon epic poem followed by four comics: DC, DC, DC, then Cypher which is also reviewed here.

045) Love and the Light: An Idyl of the Westland by Orson Ferguson Whitney, finished May 20

So I did it! I actually read an Orson Whitney poem all the way through! And a 122-page one, at that! How about me?

Having spent so much time this year thinking about the premortal romance in Mormon literature, that element of Love and the Light is what struck me first. I have probably about a hundred lines on that subject which I copied out into a notebook, but here's a glimpse of what's here:

"Dawn of love?" Nay, thus the simple,
Reckoning not with things eternal...

Whitney very clearly is teaching that God sealed our protagonists together before time began. Which I find unsettling, frankly. For all its lipservice to agency, this book doesn't seem to really accept it.

The foreword states that "The reader, while absorbing the romance, will partake necessarily of the instruction." And what instruction it is!

But let's start with the romance. The tale is told by the fated couple's mutual friend, but he is not much of a character. He's less that Walton in Frankenstein.

The two major characters (all characters are nameless) are a) Harvard-educated lad, erudite, wise, spiritual; a teacher; converts to Mormonism about halfway through and b) brilliant, atheistic, lovely; a teacher; slips deeper into antigodness; (SPOILER!) miraculous conversion near the end as she lies almost dying.

For the modern reader (the book is 91 years old --- I had to cut some pages to read the whole thing --- love my library), this book has much more to trouble that the agency question however. The concept of foreordained love drives the man to such a degree that he becomes a borderline stalker. I found him rather creepy in all honesty. He was so distasteful that I found myself rooting for her atheism, which I'm quite sure was not Whitney's intent. And her arguments were not the scary blasphemies the text asked to believe. Yes I live near Berkeley, but I think even to a less desensitized person, her arguments are not chillingly evil or whatever.

Then there is the jingoistic rahrah depiction of the wars in Cuba and the Philippines as the author accepts that America is on God's side in these battles. Check out this footnote:

81. Ingrate Rebellion (p. 108) The deliverance of the Philippine Islands from Spanish rule was followed by the rebellion of the Filipinos against the Americans, their deliverers, who succeeded in quelling the insurrection and restoring order.

Not a lot of nuanced internationalism there.

Having realized he'll never have his blaspheming love, he mourns the loss of she was supposed to be his eternally. Then, when she is forced to abandon her athiest ways after being converted by a remarkable vision, "a gift from God, he claimed her." What choice did she have? After falling at the feet of Jesus and begging entry to heaven she is told they "[turn] back all imperfection / With thy mate thou mayest pass . . . / But without him never---never!"

The book is written almost entirely in trochaic tetrameter which can get plodding if one reads too much at once but as a whole is fine.

Even though it made me laugh and gasp for the wrong reasons at times, there are moments of transcendence (cf). I liked, for instance, the first halves of Harvard Boy's talks before he, inevitable, took things too far.

This is classic Home Lit --- writing intended to instruct one in the ways of faith. I doubt it would work to that end with a Mormon audience, but as an artifact of an era, it is readable, enjoyable and just the right length to carry around for a few days.

044) Tales Of The Batman: Tim Sale by Tim Sale and some motley group of writers, finished May 17

So everybody loves Tim Sale's take on Batman enough to take all his pre-Long Halloween work and bundle it all together for consumption.

I had read one of the stories before and it was pretty good. As are all the stories here. But the art really is good. I can see why Sale's so popular. The cover gallery in back was particularly nice. 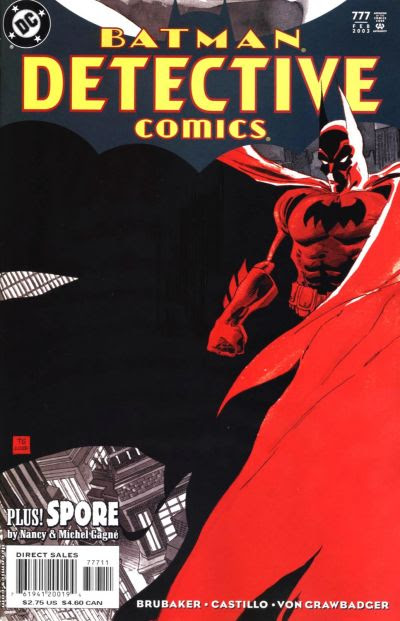 043) Catwoman: The Dark End of the Street by Ed Brubaker et al, finished May 13

Did you know? Apparently Selina Kyle decided to run for mayor of New York, then bit the big one. Tragically, Catwoman died shortly thereafter. I hadn't heard. Tragic. That they would both die, and so close to each other.

Of course not. Let's not kid ourselves.

This volume could be called Return of the Catwoman. It contains two stories. One starring a PI who runs her down but lets her go. The second chronicles her move from thief to vigilante. Although don't let the word "vigilante" put you in mind of, say, Batman. Catwoman is interested in protecting the otherwise neglected (eg streetwalkers), and she has no qualms about stealing to fund her efforts. So she's something different from the Boy Scout.

Anyway, nice book. I love tales told from nonsuper povs and I love the dancing art of Darwyn Cooke and Mike Allred. So I loved this book. Best of this batch of loans.

Ended totally in media res with a thousand balls in the air. What a pisser. I mean---even with a silly costume and background the creative crew got me involved and caring about this guy and the plot thickened and thickened and then---

That was it. No more. Goodbye. End of story.

less than a week

I've been emailing Mr Teare lately for an interview and so i finally got around to reading this book which I think I was vaguely aware of back in the Nineties but which I only really became attracted to last summer when I was working on my Survey of Mormon Comix.

Mr Teare tells me he has material enough for ten more Cypher volumes and I must say it's a shame their not in print. First, his woodcut (scratchboard?) style is great. Second, his composition style is topnotch. Third, his weirdness is so refreshing. It's not pointless weirdness which we see way too much of. Most things labeled surreal or postmodern or dada or whatever are grade-a crap. Not Cypher. He takes the weirdness of weird comics and turns it to something lovely, of good report, praiseworthy.

Someone get this man a publisher!

two days or about twenty-four hours

by Evelyn Candland, finished March 7
016) Frankenstein; or, The Modern Prometheus

by Keith Giffen and Cully Hammer, finished February 18
011) The Joker