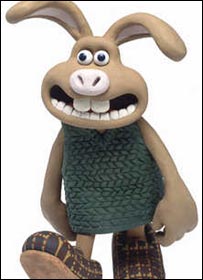 For this first time in his life, the Big O has attended a movie with his parents without them desperately hoping he will sleep through it.

(For the record, his first flick was LOTR:ROTK and his most recent had been The Incredibles.)

On Saturday, we took him to see Wallace & Gromit in The Curse of the Were-Rabbit. We thought this would be a safe choice because he has seen The Wrong Trousers approximately five billion times and loves it.

We fled the pounding bass from the apartment above on Friday night and went to the dollar theater to buy tickets, but they do not sell them the day before. But O had seen the poster and he knew we what it meant and he was anxious.

The next day, all he could do was insist we leave home and get to the theater.

We arrived in good time for the 11:20 show and settled in.

For those of you people I don't respect anymore who have waited even longer than us to see this movie, you don't know what your missing. Rabbits will be vacuumed. Cheese will be eaten. Arrrrtichokes will be kissed.

Isn't it beautiful that in a Hollywood of artificial perfection, something so unabashedly artificial can be so incredibly good? I mean--you can see thumbprints on people's teeth!

We haven't seen Corpse Bride yet (anyone--can we take a twoyearold to that?), but at this point, I don't see how it can be more deserving of this year's animated-feature Oscar.