note: two of today's authors are featured in my post today for motley vision

I first read this as a child, borrowed from my grandmother's personal library. I remember nothing of what I thought of it then. My grandmother has since passed away and this passed into my own library. Not because of the Big O's baseball obsession (he wasn't walking then) but because I had taken a class from the author and he had served as an important mentor to me. Anyway, because of the baseball obsession, I chose this book to read to the boys. Eldon Haller is from small town Hooper, Utah (near Ogden) where he was a master of the mound for his high school baseball team. He's drafted by the Royals and heads to Kansas City. Hughes is a notable writer of baseball books and the game scenes crackle. Biggo loved those. But the parts about the girl or Eldon's existential crises or buying a car or flying on planes or sitting my a stream or somebody's little brother dying? Not nearly so good. Which is why it took us so long to finish. One-sitting picture books are still the lit of choice around here. Because it took us so long (and because I had to reread the games scenes and read the rest while trying to play catch at the same time), I really don't know how good this particular book is. But it certainly wasn't bad. I would read its sequel. But if you're considering reading a Dean Hughes YA book (and don't particularly care whether it's one of the DB-published ones), may I recommend Millie Wilenheimer and the Chestnut Corporation (funny and about money) and Family Pose (serious and about hotels)? months

My faith that I put in Moriah after reading The Proviso was justified. This book is good. Parts of it are excellent. And it's still only a draft. It still has explicit sex (though not as much) but you should have no other qualms about checking this one out when it's released in a few months. Congratulations, Moriah, on a great book. Keep 'em coming. MS POLICY one month

A fairly interesting idea based on a beloved character, but disappointing. Basically, there is a religion of crime whose sacred work stars Cain and Lilith and, yeah, doesn't pay off. Too bad. about half and hour plus a couple minutes the next morning

Page one is below. If you want my take, proceed to Fob Comics. 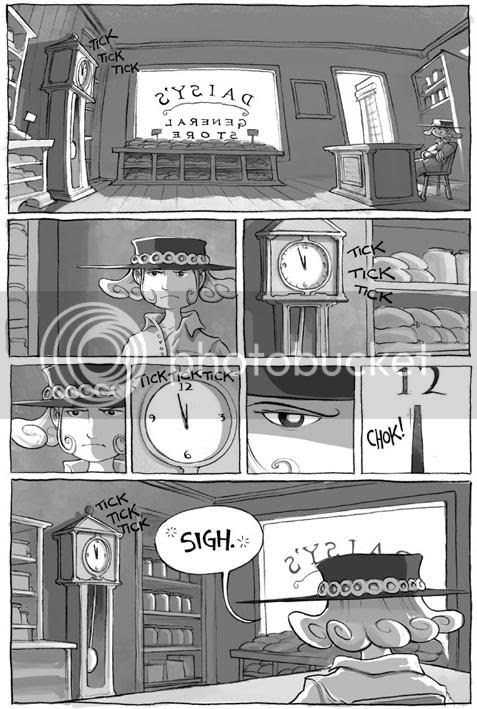 Before I started this book, I thought I would compare it to this book, which, though I haven't read it, is a Minx (and I've reviewed several) and has, at least on the surface, a similar conceit. But Good as Lily's just gonna have to wait for me to read it because this book deserves much more than comparison to an unread comic.

Gravity vs. the Girl is that rarest of beasts: the Good Comic novel. I don't know why this beast is so rare. There is no reason on this earth that comic novels shouldn't be excellent. But they rarely are. Most comic novels I've read have inconsistent character development, bad plotting, di ex machina, and other grievous sins mostly born of laziness. The worst this book does is misspell Macauley Culkin. Anyway. Back to the conceit. (I'll let the backcopy do the heavylifting.) "Samantha Green has just spent an entire year in her pajamas, and she is beginning to regret it. What's more, she is haunted by four ghosts that are former versions of herself. First up is the overachieving and materialistic attorney, who is furious with Samantha for throwing away the career she worked so hard to build. Second is the lackadaisical college student who is high on life but low on responsibility. Next is the melodramatic teenager, who is consumed with her social standing, teal eyeliner and teased bangs. Finally, there is the scrappy six-year old, whose only objective is to overcome gravity so that she can fly." That's all you need to know about the story. Now I'm going to spout some stuff that will hopefully make you think I'm smart or at least Mormon and then I'll close by suggesting you read the book. In order for Samantha to move forward with her life, she first needs to move backwards, giving the text a chiastic structure that is understated and quite successful. Even after I began to see how things were unfolding, the final ghost's raison d'être was strong enough to justify its role as the entire book's foundation. I'm impressed by the book's cohesiveness. A game like the one Noehren is playing here is easy to screw up but there are no false steps here. And when the book offers lessons it does so in an honest way --- as opposed to most comic novel's that feel a need to preachify to excuse their funniness. BEING FUNNY IS NOT A CRIME. This book knows that and feels no shame in making you laugh. So refreshing. It closing up with an epilogue even Edgy could love that provides unusually perfect bookending. And although there is nothing explicitly Mormon about this book, it's clean enough to recommend to my mother. So no one here will feel the need to feel betrayed. Anyway. Buy your own copy. about three weeks

by Evelyn Candland, finished March 7 016) Frankenstein; or, The Modern Prometheus

by Keith Giffen and Cully Hammer, finished February 18 011) The Joker

Email ThisBlogThis!Share to TwitterShare to FacebookShare to Pinterest
Labels: baseball, five books at a time