Let me start by saying that I am afraid, very afraid. Now on we go.

When I wrote about May Swenson a few months ago, I mentioned Levi Peterson's article "In Defense of Mormon Erotica" and said I had once wanted to blog more completely on that article (and its companion piece by B.W. Jorgensen).

I heard the above quote from Brother Clark in regards to avoiding adultery (although whether or not that was its original context, I can't say), so it seems appropriate to start our discussion by applying this fearsome quote to our fearsome discussion, viz. are we too comfortable flirting with the edges? or, conversely, are we too worried about things we are not guilty of? 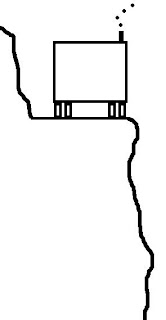 Do you know the parable of the semi truck? I think I first heard it as a deacon. The boss has a truck he regularly needs driven over a narrow mountain road and wants to determine the best driver to take this dangerous route. He asks Driver Number One how closely he can drive to the edge without falling over.

"Oh, I reckon I can get within three inches."

"How about you, Driver Number Two?"

"Oh, I reckon I can drive the whole way with half my tread hanging in the air."

"And you, Driver Number Three?"

"I would stay as far away from the edge of that cliff as I could, sir."

And Driver Number Three gets the job.

The problem with driving as far away from the edge as one can get, is that one is liable to crash into the mountain wall on the other side.

I actually think this story works better on foot:

"I would hug the wall and inch my way forward, sir."

"The wall that's twenty feet from the cliff?"

I think this incapacitating fear of falling over the cliff has been a great affliction in Mormon art --- literature specifically, which is my primary interest. The uproar over Angels Falling Softly would seem to illustrate this. (I can't comment on that specifically until my copy comes in the mail.) (And, you know, I read it.) (And form an opinion.) (And so forth.) So I think it might be helpful to talk about the erotic and its role in LDS literature. I'll start with the articles linked to above, but I have some of my own ideas that I will also bring up, some today, some later.

Perhaps we should start with some definitions:

Erotica is generally understood as giving a "positive" depiction of sex. So the Song of Solomon would count, but Ezekial 23 would not. It often may titillate and arouse, but that is not its sole purpose --- it also desires to be beautiful.

Pornography is the term our guests will focus on and they will alter the definition slightly as we go along, but let's start with D.H. Lawrence's definition: "Pornography is the attempt to insult sex, to do dirt on it." It is artless and ugly and serves just one purpose: to give your brain an unnatural (and unholy) injection of the sex drug.

Obscenity as I usually use it means something utterly without even pretended redeeming value. Peterson will use it in reference to profanity ("obscene" language), but I'm mostly glossing over those parts of his article. In fact, we will not be needing this term much today, but I want you to remember this word when we get to later parts of this series.

All three of the above terms I am, by implication, applying to works whose primary purpose is provoke a sexual response in its reader/viewer/consumer. And I want to say now that neither Peterson nor Jorgensen is promoting such art or "art."

Instead, returning to our cliff-road metaphor, sticking too close to the wall is what Peterson calls the "obverse sin of prudery . . . [which] forces the sexual impulse underground, banishes it to the territory of the abnormal and forbidden." And this is what we are talking about: not a prurient focus on sexuality, but a recognition of its central role in human life. And if you doubt its centrality, riddle me this: Where exactly did you come from?

Peterson has "difficulty believing that God has infused the human psyche with the powerful sexual impulse merely to sift the obedient from the disobedient, the self-controlled from the self-indulgent, the ascetic from the sensuous." And so do I. Sex wasn't given to people simply to speed along their damnation. Does that sound like the God you know?

LDS doctrine doesn't fit the above chart at all. Sex may not have gotten an explicit shoutout in the Proclamation, but you can only be told to love your spouse in so many ways before you have to be rather dense not to make the conceptual leap. I think we can safely assume Mormons have sex and even that Mormons should have sex. So long as it's within doctrinal bounds (ie, husband and wife), we can even assume enthusiastic approval on the part of deity. Still with me?

Let's start by looking at these excerpts from Peterson, which will help us understand his distinction between a pornographic emphasis on sex and a healthy recognition of sex:

"Then how shall I distinguish between an acceptable expression of sexuality and pornography? It is a matter of proportion. Proportion . . . suggests a variety of elements standing in harmonious relationship with one another, none without due representation, each fitted to each, each shaped by the shape of the whole."

"It is gross disproportion that creates pornography. . . . [When things (sex, violence, &c) are] amassed, concentrated, enormously emphasized --- if they become the single end and purpose of the writing --- they are pornographic. But if they are intermittent in an action, if they mingle with other images and deeds, balancing proportionately, appearing as a part rather than the whole of life, then they are not pornographic."

Got that? Sex, as I hope you will agree, is an important and healthy and spiritually sound part of a full human life. But if someone were to spend all day and night seeking sex, that would not be good or healthy or sound. It would be sick and evil and wrong. So it is with literature. Literature for-by-and-about sex will be pornographic. Literature which recognizes the role of sex in life is merely honest and true and good. Or potentially so, at least.

Peterson also says that no writer is required to write such aspects of life, but that "Timid authors [do] fall into the error of incompleteness." A novel about a happy marriage without any indication that their home has a bedroom would not feel entirely honest.

A lot of what is and is not pornography has to do with who is reading it. No one has called "The Widower" pornographic, but if you're looking for sex, you'll find plenty.

No one's accused the Queen or Silly of being pornographic for recognizing the role of marital congress in their marital relationships. Why would they?

Let me be clear: I'm not demanding constant sex scenes. I'm not even arguing that every reader should read about sex at all, let alone as part of a regular literary diet. I'll come back to this in Part IV, but, when I was a teenager, the briefest mention of sex could overwhelm my hormone-charged brain. Even "The Widower" might have been dangerous to me then. And I don't want to suggest that I know what's best for you. That would be wrong.

But you know the story about the laughing husband closing the bedroom door, right? How that scene made its book so terribly controversial in LDS circles? Have you heard about when Covenant took their bookstore managers to The Mayan for dinner and had several walked out, offended by the bare-chested men doing cliff dives? Can anyone pretend that this suggests a healthy relationship with sex?

I find such prudery bizarre for such a profamily religion, don't you? And these are our gatekeepers into the world of LDS literature!

(Note: I'm not trying to paint with too broad a brush. Dean Hughes's Children of the Promise books, for instance, dealt with sex directly and with maturity and intelligence.)

As a Publishers Weekly reviewer said, "It is one of the tropes of pure pornography that events are without consequence. No babies, no STDs, no trauma, no memories best left unexamined." That is most assuredly not what I or either of my guests is suggesting.

How is this possible? We'll continue our discussion next time. Look for Part II of this series one week from today.
Thritten by Th. at 5:23 AM

Email ThisBlogThis!Share to TwitterShare to FacebookShare to Pinterest
Labels: "The Widower", lds-eros