the summer of 2002. The impetus to read this one was twofold: Lady Steed was removing most of the Pratchett books from the front room and this one's title was an obvious reference to Macbeth which I was about to start reading (see below). (Also, it's one of only three that we own that I hadn't yet read.)

In fact, the two books even share the same opening line of dialogue. Using Google Books, I've copied these first lines from each book (though not from the editions I read) for your comparative pleasure (haha): 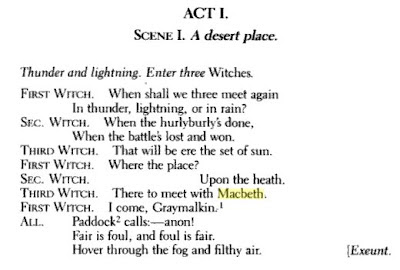 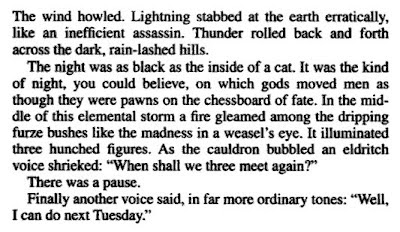 Not quite the same.

If you don't know Pratchett, you don't know the whirlwind it is to read him. He's not just a master joke teller, but he's one of the plain best writers I know. Wyrd Sisters is one of the earlier Discworld novels and the only two earlier ones I've read I consider among his weakest works. By Wyrd however, he's fully arrived. This book gives him the opportunity to spit out references to everything from Charlie Chaplin to Samuel Beckett and nothing is safe.

(The Oxford Times calls him "Simply the best humorous writer of the twentieth century" which is certainly arguable -- the main competition being Douglas Adams and P.G. Wodehouse.)

Anyway, you should read a Discworld novel. Depending on the person, my recommendation for first read is usually either Thief of Time

, but I don't think you'ld go wrong with Wyrd Sisters. Ours is about to go in a box, but if you want to take it around the block, we'll pull it back out for you.

I know. Again. And I don't even really like this book -- I certainly don't like reading it. By the end of the month I will have read it three more times. But I'm not going to count those. Twice in four months is plenty counting enough.

I don't know the last time I read Shakespeare just because I wanted to read Shakespeare and for no other reason--possibly even ten years. I find this remarkable. Certainly not what me at 18 would have expected. Poor me at 18--always getting disappointed by me at later ages.

And I totally fell for Malcolm's I-am-a-bad-guy speech. I didn't even get what it was about--I had to consult the notes then go back and reread it. (At which point it was obvious and I felt stupid. This feeling must be why I haven't read for fun any tragedies I'm not already familiar with. Titus Andronicus for example. Or Coriolanus.)

Anyway, I don't like Macbeth all that much. I just don't think it has as much to say as, say, Hamlet. Or Romeo and Juliet. It's sort of a one-note opera.

(Although I still think the current Broadway version with Patrick Stewart would be an awesome way to spend an evening.

Now: not being Hamlet does not make a thing bad.

Else all the world would be bad.

I need to preface remarks by saying I liked this book very much and I recommend it to anyone. I need to say that because it might seem like many of my comments are denigratory, but remember: I liked this book. I laughed. I cried. The former literally. The latter darn near. A few more tear molecules and I would have spilled over.

My biggest problem with the book is a problem I got over (eventually) (mostly) and that is it's style. The book is widely rumored to read like Kerouac, but, never having read Kerouac, I can't say. There's not doubt the book was highly influenced by the man -- the title even plays on one of his titles -- and is a phrase lifted straight from another Jack book. Plus: lots of Kerouac epigrams. So the Kerouac thing I'm guessing is a yes.

And it's not very . . . literary. I finally figured out what it was when I hit the final page: the style is conversational. Only, not conversational in the sense Coke and I are chatting. No, it's more like he's a master storyteller and we're in matching recliners and he's spinning his old-man yarns of long ago. And you want him to go on and on and never stop until he says "But that's another story altogether" and you have to admit he's right and then you stand and stretch and clap him on the back and thank him for having you over and assure him you can see yourself out, no problem, thanks again.

Anyway, if you haven't been paying attention or have had your attention riveted to things like the Democratic Primaries or the Wall Street Journal, you probably don't know, but On the Road to Heaven swept the Mormon awards this year, novel of the year from both the AML and the Whitneys (here's a nice breakdown on the difference and whether on not this fact even matters). I don't know if it deserved it as I haven't read much of the competition, but I would like to make a plea to Mormon bookstores to carry this book. Yes, it has breasts and pot and stuff, but anyone who thinks this book is not beautiful and holy and totally 13th is out of their mind. Or, more likely, can't read.

So, would you like a plot summary? Here you go.

This book, which, although masquerading as fiction is almost 100% Coke's real story, takes our young Colorado hippie from long hair and pot and mountaintop vigils and Kerouac

and even Ram Dass

to the Book of Mormon of all things and, woh, a mission to Columbia complete with tapeworms and earthquakes.

But the book's not.

about a week and a half

026) The Great American Citizenship Quiz: Can You Pass Your Own Country's Citizenship Test?

This book uses questions off the test given to those becoming naturalized citizens of the United States as a launch into bite-sized portions of history and political theory. A fun book with occasional unknown nuggets. I for instance did not know the British occupied New York City for two years after the surrender at Yorktown. How did that work? I don't know.

(Also worth noting, even though I only skimmed the appendices: The Constitution is such a beautiful document in its brevity and perfection. Really gets me right here, like a four-inch needle of patriotism straight to the heart.)

an hour and a half maybe

by Marta Acosta, finished March 4
018) A War of Gifts: An Ender Story

by Jane Austen, finished January 20
005) The Salmon of Doubt:: Hitchhiking the Galaxy One Last Time

by Douglas Adams, finished January 14
004) Lord of the Flies

by Michael Crichton, finished January 7
002) The Marketing of Sister B