Today in Thutopia I am hosting Everyday Mormon Writer's new contest. In case you've missed previous mention of EMW, it's an online zine bringing bitesize (single-sitting-size) portions of fiction, poetry, and nonfiction. They are currently presenting the twelve finalists of their Four Centuries of Mormon Stories contest, with the discussions distributed across the bloggernacle (which I find a grand gesture of togetherness).

The conceit of the contest is simple: three stories for every century of Mormon history---the 19th, the 20th, the 21st, the 22nd. If you've been playing along at home, so far we've read the 19th century and, including today, two of three for the 20th century. Join the fun and next week you can join us in the present and the future!

Today's 20th-century story is “When the Bishop Started Killing Dogs” by Steven Peck. I'm a great Peck fan, starting with his science writing. He's released two books recently which have received much love: A Short Stay in Hell (which I recommend) and A Scholar of Moab (which I intend to read soon). He's also the author of a terrific story about the Church of Jesus Christ of Martian Saints. Pick up Monsters & Mormons to read that one. 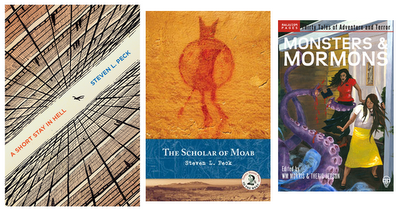 “When the Bishop Started Killing Dogs”
by Steven Peck

It’s funny what makes a man go crazy but one thing is sure no one expects it to be the Ward Bishop. It was Sunday morning and I noticed the police cars down the street at the Mullers’. Liz and I ran over to see what was going on. In our town when you see a police car at a neighbor’s yard you zip over because you know who it is that lives there. Plus we are all in the same Ward. When we got there it was plain to see what had happened. On their front lawn was their dog dead and with an arrow stuck in its chest. The officer was pulling it out and we could all see that it had a target tip and not a hunting tip and I think we were all a little surprised. It popped into our heads that this must have been teenagers because who else would have used a target tip when you want to take something down? The Muller kids were all crying and Sister Muller was crying too but she was . . . . read the rest then return

Let's get the discussion going. To start things off, may I suggest some topics for your consideration?

The 20th century is a long time. About a hundred years if I recollect correctly. When do you place this story? How can you tell?

The story reveals its big surprise right in the title. But this evil Atticus tale is saving its true surprise for the end. How seriously do you take the new bishop's thinking?

Thmazing's Thutopia is the blog home of Eric W Jepson, aka Theric, Th., Theudonymous, Thashionista, thetcetera. To read more thmusings about the Mormon arts, Mormon sex, things to read, svithes, whatever, feel free to click around. Either way, it was lovely having you here today. See you aroudn the Bloggernacle.