Waiting for Mitt Romney to Lead

I used to be a Romney booster. I was excited about his candidacy in 2008. Largely this was because I lived in Utah in 2002 and the way he swept in and saved the state from embarrassment and disaster was wondrous. Then he became a Republican governor of Massachusettes (!) which creates the sort of Venn diagram wherein a moderate might find a desireable presidential candidate.

Besides that, other than the superrich thing, he seems of a type I know very well and tend to like very much. I'm not saying I would be bosom friends with him, but I'm sure I would get along well with the man.

In the last few years however, Romney's made a real effort to alienate moderates such as myself. (Sorta like McCain did, come to think of it. I voted for McCain in the 2000 primary. Voted Nader in the 2000 general, Obama in the 2008 general.) As a moderate, I have my issues with Obama. And I learned my lesson in 2004 when I voted for Bush: Abe's seitching-horses-midriver argument is fallible. (Although the Democrats could have tried harder to find a candidate I could vote for.) 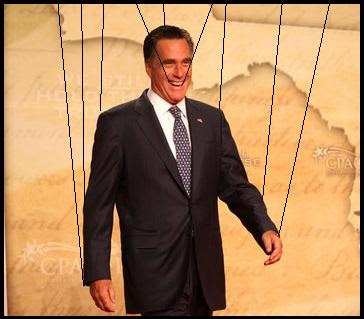 Anyway. Back to Romney. He has the Republican nomination now and no one can take it away from him. The time for pandering to the far right has passed. Now Romney can decide whether he will continue through November as their puppet or if he will lead. Last night was not promising. You have a crowd who will cheer just about whatever you say. You can slip in a few hints that you're still your own man. Instead we get things like this:

President Obama promised to begin to slow the rise of the oceans.

And to heal the planet. My promises to help you and your family.

Now, it makes a nice soundbite. Obama is lost in grandiose windmill hunts while I will help you. But, on the other hand, this was an easy time to make a slight shift. Remember when moderates could pretend Huntsman might win the GOP nom? You know, the guy who said that when Republicans "take a position that basically runs counter to what 98 of 100 climate scientists have said, what the National Academy of Science has said about what is causing climate change and man's contribution to it, I think we find ourselves on the wrong side of science, and, therefore, in a losing position." Almost everyone (outside those who will vote red no matter what) agree with this statement. And the GOP's ignorant stance on climate impact forces many in the middle to view their whole gameplan as askew.

Maybe we'll see Mitt act like a leader between now and November, but little words will never have the symbolic weight they could have had last night.


Of course, living in California, it doesn't matter whether I vote blue or red until a few more states convert to the popular vote.

Because of this, I'm thinking of lodging a protest vote for a third-party candidate this year. Another bonus of such a vote is I can keep alive my record of never voting for the same party twice in presidential races.
Thritten by Th. at 10:26 AM

Email ThisBlogThis!Share to TwitterShare to FacebookShare to Pinterest
Labels: politics