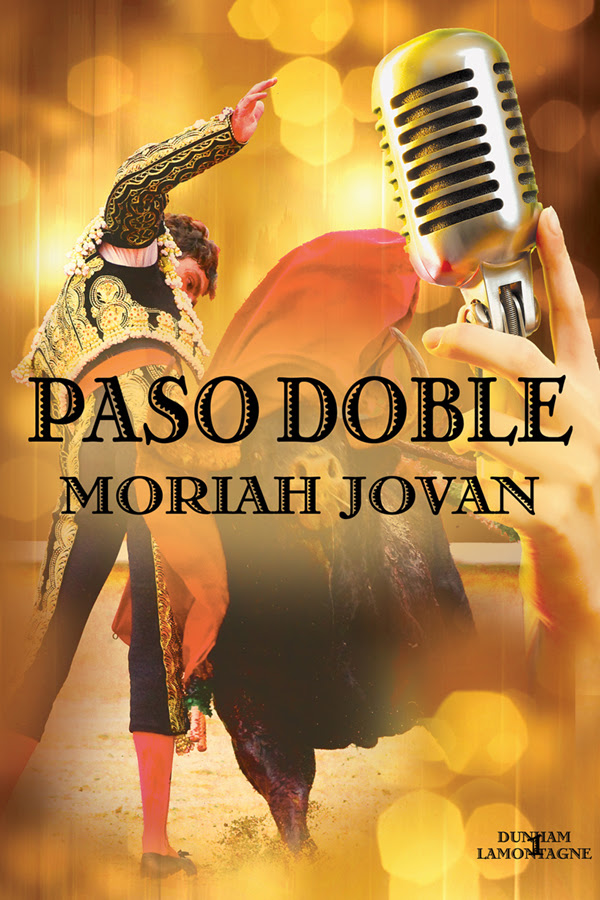 If you're not familiar with Moriah's work, you might check out my reviews of The Proviso or Magdalene. Paso Doble shares their DNA. As with all the Dunham books, the lead characters are enormous, godlike figures who tower over the landscape. Victoria is a Dunham cousin and 1) a multilingual polymath and a leading scholar of ESL, 2) a wildly talented lounge singer, 3) the most beautiful woman in Europe. Emilio is a close friend and mentor to a Dunham cousin and 1) the greatest matador of his generation, 2) an exquisitely talented lovemaker, 3) a genius chemist. These are the sorts of things we expect from Jovan protagonists. But they are difficult characters to hate because they are also deeply flawed---and their flaws flow from their godlike attributes.

Victoria, aware is a genius and beautiful, pushes everyone's buttons. She can't get tenure and no man can put up with her. Especially since, as a devout Mormon, she's keeping her garments on until marriage. Most guys can't put up with her nearly long enough for that. Plus, she has very little patience for other people and, being incapable of taking offence, can very easily offend. She's become emotionally distant from just about everyone.

Emilio is also emotionally distant---he's as desired by the opposite sex, but his distance comes from frequent partaking. He has not room for emotional depth because he gives a little to so many. Plus, he's a natural introvert and finds people exhausting. His reputation as a notoriously sexed-up tabloid-popular matador gets him blacklisted from university jobs and he can't stand working as an assembly-line chemist. And so he's trapped in a glamorous career he's grown out of.

So these two sad and lonely gods must collide.

I've labeled this post part of the LDS Eros series because what I'm most interested in from a Mormon-literature standpoint is Moriah's navigation of this relationship between a "manslut" and an "ice-vagina." Or, more importantly, someone for whom sex has been cheap and someone who holds it so dear she demands another's life in exchange for access. (That might sound melodramatic, but I think it's a fair description of how it seems on the outside to many people.)

It's a clash of sexual cultures---and cultures that are diverging at speed. People embarrassed to be virgins at 20 are written about with the same bemused pity as those who choose virginity until marriage at age 29. We have two soulmates and the rules state they must get together. But in addition to the little navigations every relationship must make, they have a massive gulf between them called divergent sexual norms. And that's the most striking element of their story.

Additionally, speaking as a male writer, Moriah's descriptions of Victoria's (female) sexual need and confusion provide me with vocabulary I would not otherwise have. I know her work is too explicit for many Mormon writers, but I think you shoudl read her anyway. We need to deal with sexuality more as a people and reading her work is a great place to consider how it can be done. Even if most of us will not show her happy delight in the word cock.

So how does Paso Doble stack up against her other works? I've read the first three and (I'm well into the fourth and will start the sixth [about Victoria's twin] before the week is out) and I would rank the one's I've read this this (in terms of IMPORTANCE):

This is simply great literature. In my opinion, one of the most important Mormon books in recent memory.

A flawed novel, but massive in scale and quantity of ideas. My least favorite, but you can't deny its ambition.

Charming fun. Interesting work with sexuality but clumsy in the penultimate chapters and while a delightful lark, not IMPORTANT.

Equal to Paso Doble, though cleaner in execution. More ideas here, less there. It's a wash.

In the end, Paso Doble is a fun read, especially if you like to laugh at the foibles of gods---while falling in love with them yourselves---and a useful read, if you want to think about ways to attack sex from a Mormon standpoint.


035) Of Many Hearts and Many Minds: The Mormon Novel and the Post-Utopian Challenge of Assimilation by Scott Hales, finished May 22
034) Field Notes on Language and Kinship by Tyler Chadwick, finished May 21
033) The Long Ships by Frans G. Bengtsson, finished May 20